With the end of summer fast approaching, and the son and daughter about to gain full employment (please God), a family trip was in order.   Where to go?  Well, that would be nirvana/heaven-on-earth/the foodies’ paradise … aka Napa Valley.

We decided to make the drive this time so off we set up Highway 5 (Hwy 1 is obviously more scenic but we wanted to get here sooner).    After a brief stop for lunch at Harris Ranch (instead of all the fast food along the way), we were happily ensconced at Silverado Resort & Spafor 4 days …

Hotels in the general Napa area have gotten really pricey, so I’m considering these digs as pretty much a “bargain” when taking into account the spaciousness (we’re in a 3-BR condo), full kitchen (for breakfast and snacks), multiple pools plus being right on the golf course for gorgeous scenery.   As this is really high season – end of summer and Labor Day weekend – I made dinner reservations in advance and left our days open. 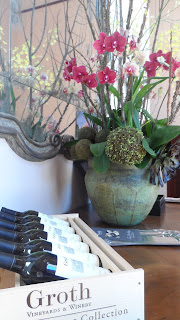 Our first full day began with randomly heading up the Silverado Trail for a stop at Robert Sinskey Winery.  Wine tasting before lunch? 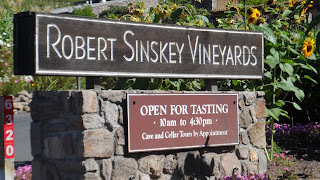 No problem.  And if Sinskey is good enough for The Barefoot Contessa to have made it part of her show, then it’s good enough for us.  Actually we were out of their wonderful wines at home so a small purchase was in order, as it was at our next stop — Groth Winery.


Across the valley and south to Yountville for lunch at Redd Wood.
Now open more than a year, this is the second restaurant in Napa by renowned chef Richard Reddington (we’ll be dining at his eponymous Redd our last night here).  Reddington, who was executive chef at Auberge du Soleil prior to going out on his own, clearly learned from many of the legendary restaurateurs under whom he trained over the years.  His food is just downright delicious with a touch of fun … Redd Wood is located next to one of the newer boutique hotels in Yountville — North Block Hotel –so guess where you’d be having breakfast if you stayed there! And by chance we were able to say hello as he came out — not because we were there but to greet the grande dame of the area, Margrit Mondavi (as in wife of the late Robert and please don’t ask me how I recognized her ..).  It was great to pay our respects to him and prepare him for our visit on Friday …

I would be remiss not mentioning the corn soup at lunch — a small amount offered with compliments that was cold, light, and can only be described as a corn milkshake.  It was wonderful … and the pizza was to-die-for!

That evening was was spent at Mustards Grill, a location described in a previous blog post.  What was noteworthy besides their fun signage and the always-delicious food was the staff … they are serious about the food and preparation, but enjoy themselves at the same time.  That made for a wonderful evening (not to mention the nectarine/fig/blackberry cobbler with buttermilk ice cream …) 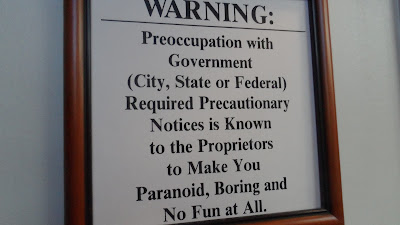 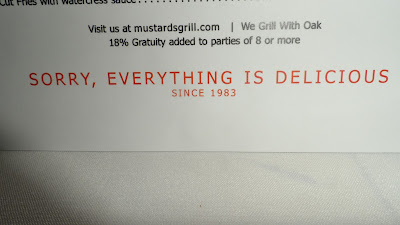 Serious wine tasting/buying was on the agenda the next day, including Shafer, Clos du Val, Stag’s Leap and a totally off-the-map winery named
David Fulton.  In between we had our Thomas Keller fix with lunch at Bouchon (GREAT) and then up to Dean and DeLuca.  As with previous visits, the hubby works with their personnel to put together a case of wines that are generally available only here in Napa.  Many of the wineries’ production is so small that everything is consumed locally (Fulton produces under 400 cases per year as an example).  That case will be a welcome delivery back home.


After a very casual night, we headed to Sonoma for a walkaround the town square before going to Santa Rosa and lunch at Guy Fieri’s Johnny Garlics (he wasn’t there …).  We did a big sweep north and then west and ended up back in Calistoga after getting the full flavor of the area.  First stop was Duckhorn, followed by Cuvaison and Joseph Phelps. 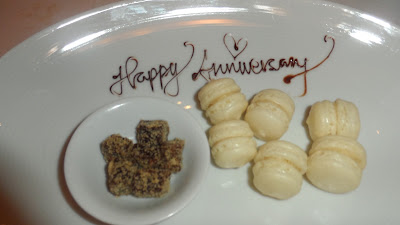 The last evening coincided with our anniversary and it was a pleasure to dine at Redd in Yountville with cousins.  By that time, honestly I was ready to surrender and savor the thought of a return visit .. We flew home (the son drove on to Vegas) after another fun visit with family in Danville, and completed the trip with a celebrity encounter at the Burbank airport…

Teri B.
GUIDELINES FOR SAFE TRAVELS
CELEBRATING A MILESTONE BIRTHDAY (PART 1 – THE HUBBY)