Things I LoveWining/Dining
Teri B.5 years ago713 views
Baseball — specifically visiting new parks — is the ONLY reason to go to Atlanta & Miami in June, at least for me and the hubby who are humidity adverse to say the least.  But one must go when one can, and this relatively short jaunt fit our calendar.   In addition to exploring local cuisine, we saw some family and friends.
It is an understatement that I wasn’t always a baseball fan.  Upon committing to the hubby — your basic lifelong worshiper of the game — I resisted for the first few years. But then the 1988 World Series happened.  I was not there for the famous Gibson walk-off, but the hubby was.  Fortunately at the time I didn’t know what I didn’t know; and, by the time I did, it was too late to feel bad about missing that historic home run.
Not that I have been deprived, mind you.   I witnessed the heyday of Bruin basketball, led by the Wizard of Westwood, and attended every game.  I was at every home Lakers game my senior year of high school. I was at the Jerry West 63-foot shot.  I went to Rams games and the 1984 Olympics.   In short, I was a raised as a lover of sports.  Just never baseball.
Flash forward, and this trip represents visits to my 36th and 37th MLB stadiums. Not only am I willing to go, I look forward to this!   My only requests (which the hubby knows well): good seats
that are out of the sun. 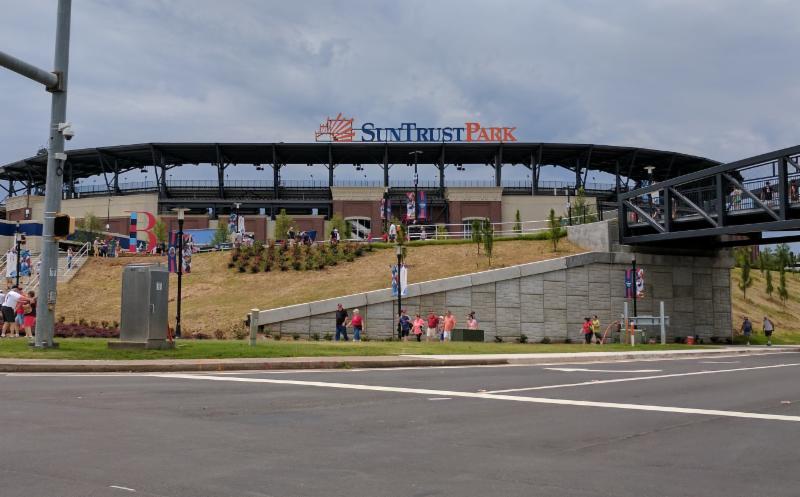 First up was Atlanta’s brand new Sun Trust Park, located in the suburb of Marietta, in it’s inaugural season.  No one could provide an answer as to why Turner Field was shuttered after just 20 years (it will now be the home of Georgia State football), but the new stadium “hits it out of the park” for many reasons.
It is easy to get to, particularly via Uber.  The food choices are really pretty vast, and delicious.  The scoreboard is incredible.  And there are sunscreen stations liberally located throughout the park, a nice touch considering there is no roof.  We particularly enjoyed their ode to years past with tons of memorabilia, an appropriate tribute to Hammerin’ Hank Aaron, etc. This is a storied franchise and the longest by years running in baseball history. Now, if only they would get rid of the annoying Tomahawk Chop, all would be well.
The game wasn’t interesting — the Braves got clobbered by the Brewers — but we encountered many who were there for the same reasons as we were, to see what the Park is all about.


While in Atlanta, we had a terrific meal at Rathbun’s, one of four restaurants from local premier chef Kevin Rathbun.  And I highly recommend the downtown Ritz Carlton where we got a terrific weekend rate.  By the way, the decision to rely on Uber instead of renting a car was a savings — not just on the rental itself, but not needing hotel parking which can be pricey.

Miami was the next stop — flying in and out of Fort Lauderdale — for our first visit to Marlins Park, opened in 2012.  I rarely fly Delta, but I must say I was impressed with how well both their hub and flight were operated.  Ft. Lauderdale was quite central to seeing friends in Boca (loved Abe & Louie’s), Delray Beach and provided excellent access to the I-95.

Marlins Park to me was unremarkable.  The best thing about it? Nobody goes to the games so great seats are always available!  And the parking structures provide a short walk, so that’s a good thing.  It’s a shame more people don’t attend, considering the team has a good roster … but so far, this year is all about the Boys in Blue, aka our beloved Dodgers, who just keep winnin’ games. This is too much fun!


Left, with Uncle Mike & Shelley Stone, who live in Boynton Beach.
Below, probably the best feature of Marlins Park is the Bobblehead Museum, where players, announcers and others in MLB are featured in a rotating (slightly shaking) display. 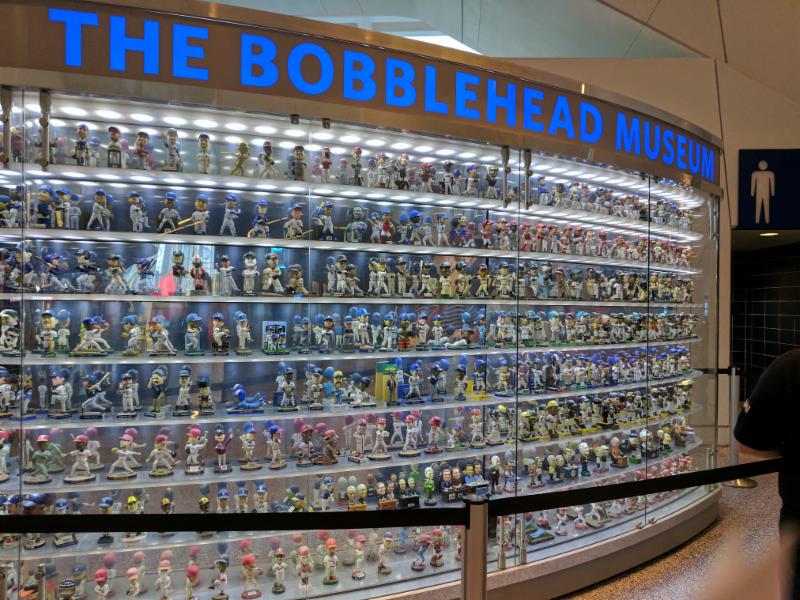 For the flight home, I was able to try Jet Blue Mint — their premium seats — and justified the expense because of our 7 a.m. departure. Another home run!  I scored two cubbies — a single “compartment” on either side of the aisle, with a truly fully-flat seat and lots of other fun amenities. My one complaint was the location of the headphone jack which required a contortionist to operate.  Small concession; it was otherwise a terrific experience.
Teri B.August 12, 2017

Teri B.
IS INTERNATIONAL TRAVEL TOO STRESSFUL? YOU DECIDE ..
HOW TO END VACATIONS WELL