International TravelThings You Should KnowWining/Dining
Teri B.3 years ago999 views

Baby, it’s cold outside! You know those temperature reports: “Real temp” vs. “Feels like”? Well, that summed up the weather in Helsinki in the latter part of April. Perhaps because there’s so much water around and blustery winds, the temps felt really cold.

We forged ahead with a visit to the UNESCO World Heritage site of Suomenlinna, a sea fortress accessed via a ferry ride. We walked around the area on uneven cobblestone paths and decided to head back to the mainland. Better to spend time walking around Helsinki, visiting the Helsinki Cathedral and the Rock Church.  The latter is a magnificent structure carved out of rock with such incredible acoustics that no amplification is required.

The enormous white Helsinki Cathedral serves ably as a guidepost for finding one’s way around as it is visible over the top of virtually every other building.  Finding our way back to the hotel was a cinch once the Cathedral was in view. Our traveling companion Julie Shuer joined us the second day so we caught up and, of course, did some shopping at the enormous Stockmann “store” — Helsinki’s version of Harrod’s although not as high-end. One could buy virtually any product under the sun there. After a few small purchases, we met up with the hubby and went to Juuli for dinner. It was at that point that I discovered I was without my wallet. Ugh. The only place it could be was back at Stockmann, now closed for the night. I asked the hotel concierge what the chances were of getting the wallet back; he assured me that it was nearly 100% if found in the store.

My track record is pretty pristine while traveling — almost no lost items.  I usually leave my wallet in the safe (with the passports) but obviously not this time. Fortunately, the store opened at 9am; we were leaving on the 10:30 ferry for Tallinn.  I was there when the store opened.  Sure enough, there it was at Lost & Found completely intact — cash, credit cards, etc.  You gotta love the integrity of the Finns. I had a previous glimpse on the ferry when I dropped a glove and at least four people alerted me to that.  Thank you for your honesty!

The Viking Line “ship” for the 2+ hour ride across the Baltic Sea (Bay of Finland) was akin to a small cruise ship and much bigger than I expected.   Bingo, entertainment, slot machines and duty free shopping — really, can’t folks just sit for a bit?

The Tallinn accommodations were outstanding at the Swisshotel on the 22nd floor with an amazing view.  Modern and spacious with a bathroom I could take home with me.  Like many other European cities, the old town has a central area — town square — with shops and restaurants.  We enjoyed seeing the Tallinn synagogue which was built roughly 13 years ago.  We were told there are about 1500 Jews in Tallinn, and the synagogue has 100 families as members.  They boast the only Kosher restaurant in the city within the synagogue itself. 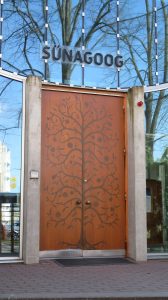 We had an outstanding meal at a restaurant called Tchaikovsky with terrific service, food and some pretty decent music while we dined.  It was a exquisite evening and they clearly are serious about the entire experience.  Next up:  getting our rental car and heading to Riga, Latvia — about four hours away.

TRAVEL RULES — THEY ARE A CHANGIN’