International Travel
Teri B.8 years ago613 views
A glorious week spent in the Cayman Islands (continuation of the previous post) included a visit to the La Prairie Spa in the hotel.  Frankly the cost of a massage at high-end resorts makes me generally think twice about indulging.  But a “special offer” was too tempting to resist so off I went to explore and report (it is my duty, after all, don’t you think??)
The facility, called Silver Rain, is beautifully appointed and the staff quite gracious.  The waiting area had several chaises with pillows and blankets, and a heated neck pillow was offered prior to my treatment as well as a “music menu.”  That, together with a first-rate massseur and the champagne offered post treatment, sealed the deal for me.  Overall, a most lovely way to spend an afternoon. 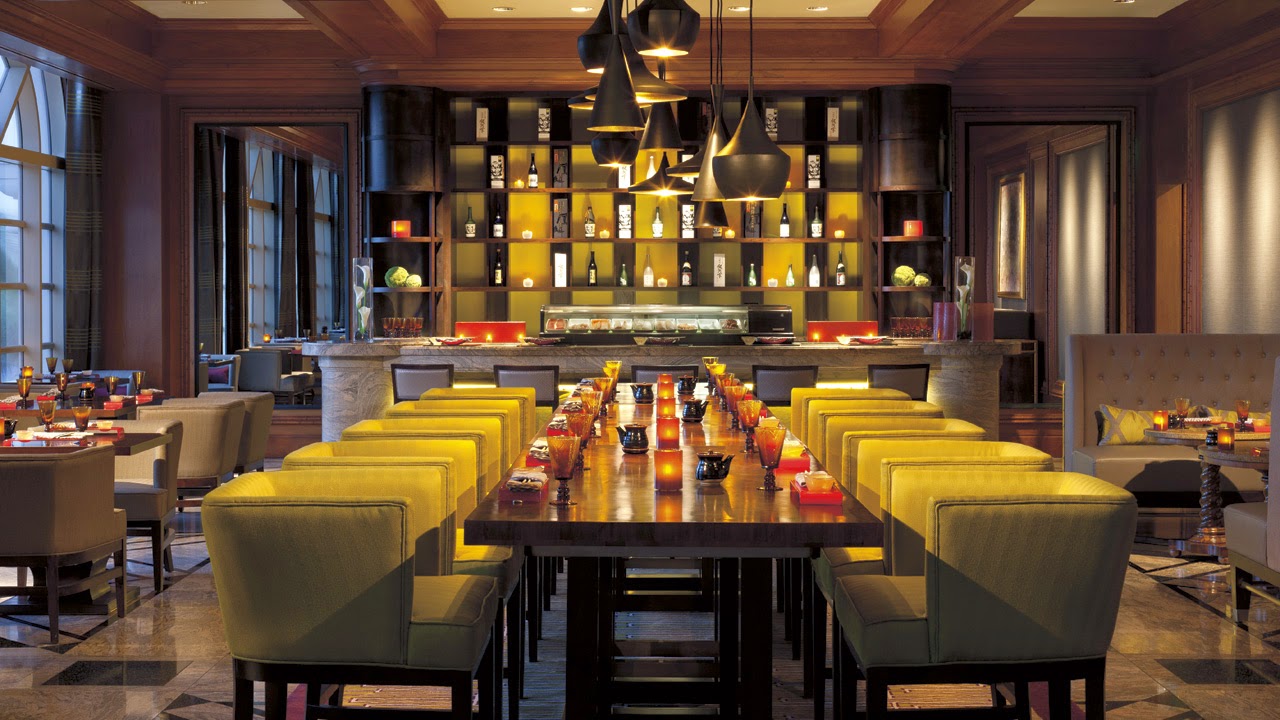 Being the smack in the middle of college football season and being married to a devoted fan made for Saturday night dinner in the hotel and a night watching various games. One of the hotel restaurants is Taikun, offering incredible sushi creations in a beautiful setting.

Stingray City is a must-see in the Caymans, so we opted to be part of the estimated one million annual visitors who swim with these rays.  Clearly  I wasn’t the first nor last who had adventurer Steve Irwin in mind (he was stung by a ray and died), because there was a ready answer to the question of whether we were in any danger. After our catamaran (70 person capacity) made the short distance to that area, into the water we went. These rays are very friendly and literally will eat out of your hand with the live bait (squid) provided by our guide.  The water was barely chest deep, perfectly clear, and there were at least 50 rays swimming in the area.  Our second stop that afternoon was maybe 10 minutes away for some wonderful snorkeling to complete the excursion before being taken back to the dock and then hotel. 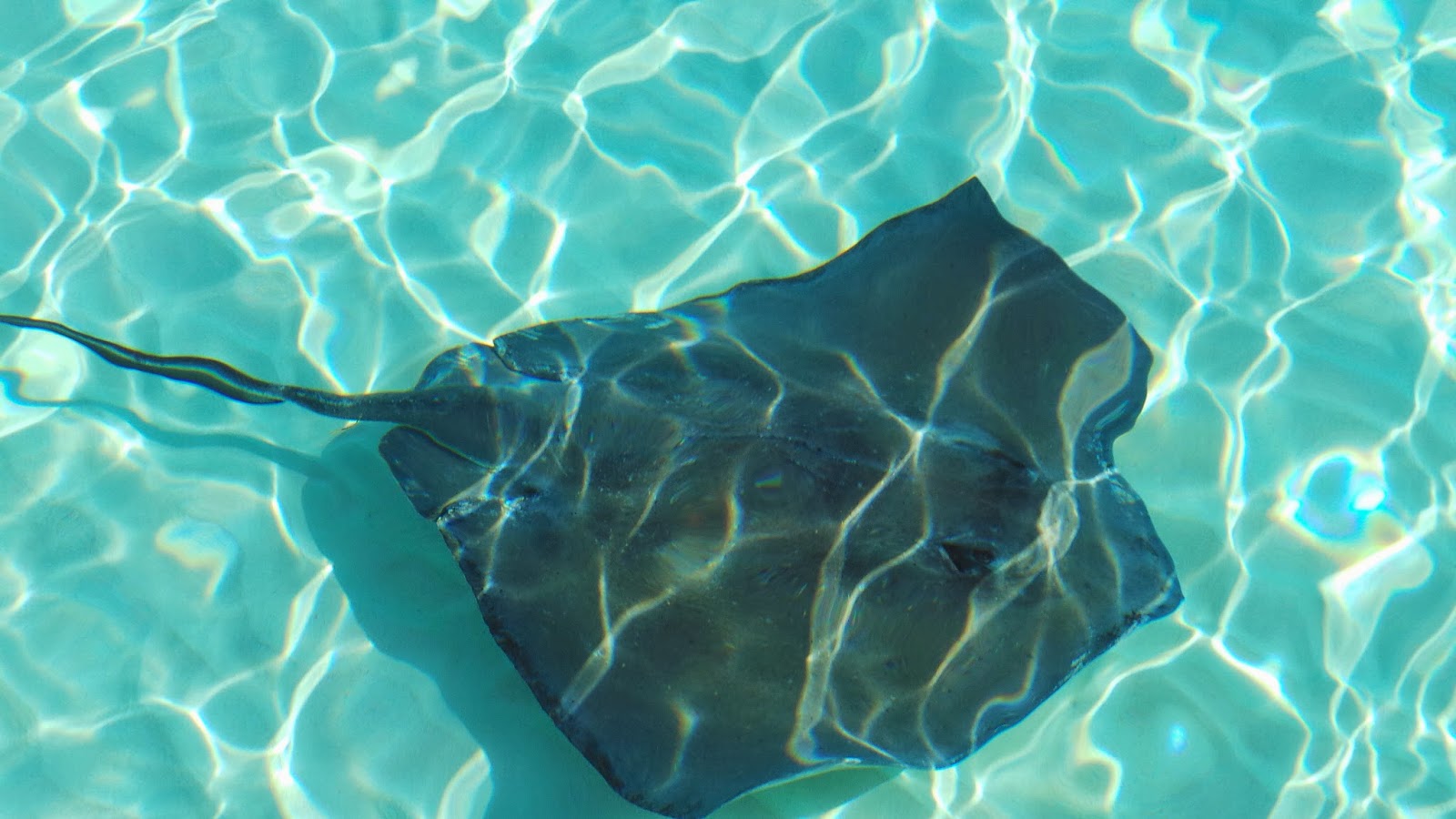 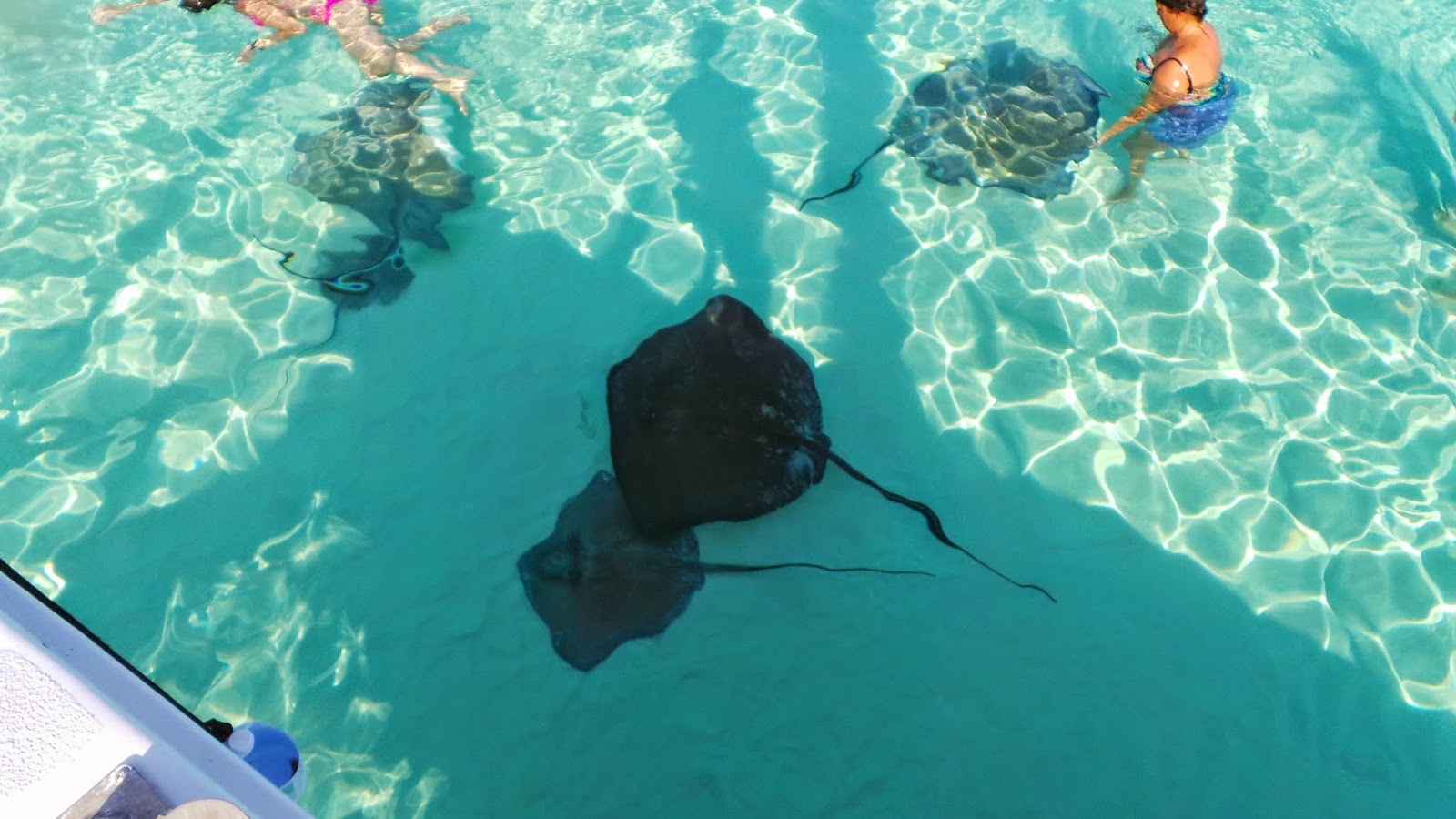 The Caymans are remarkably international, and I was trying to figure out why. It certainly isn’t a bargain in terms of cost, but the sheer beauty might outweigh that detail. Our hotel has employees from 60 different countries (an immigration challenge, to say the least).  We spoke to people from such diverse locations as Nepal, Bulgaria, The Philippines, Malaysia, and Austria, each with a different journey.  One night we engaged two Canadians at the local DQ who happened to be in a similar line of work as the hubby (their designation is Chartered Accountant).  The Caymans offer plentiful employment in that field, either for banks or hedge funds.   They actually gave us a ride back to our hotel so you never know how a casual conversation might end ..

As luck would have it, our last dinner turned out to be the best — certainly the most beautiful setting — at Blue Cilantro.  Fortunately for me there was no cilantro in sight (can’t stand it), but there was a gorgeous setting, attentive staff (and chef) and some inventive food.  Pictures tell it best: 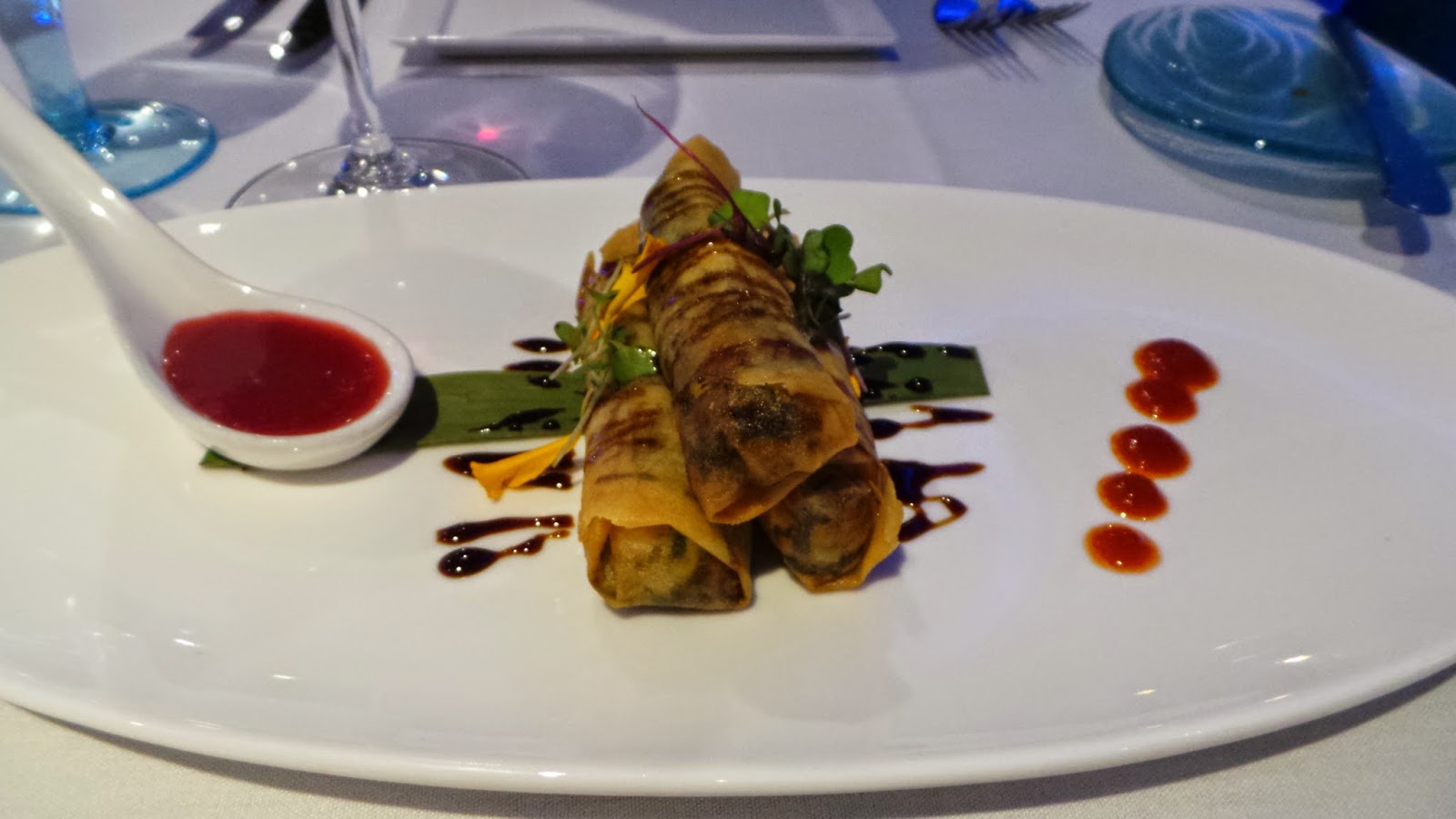 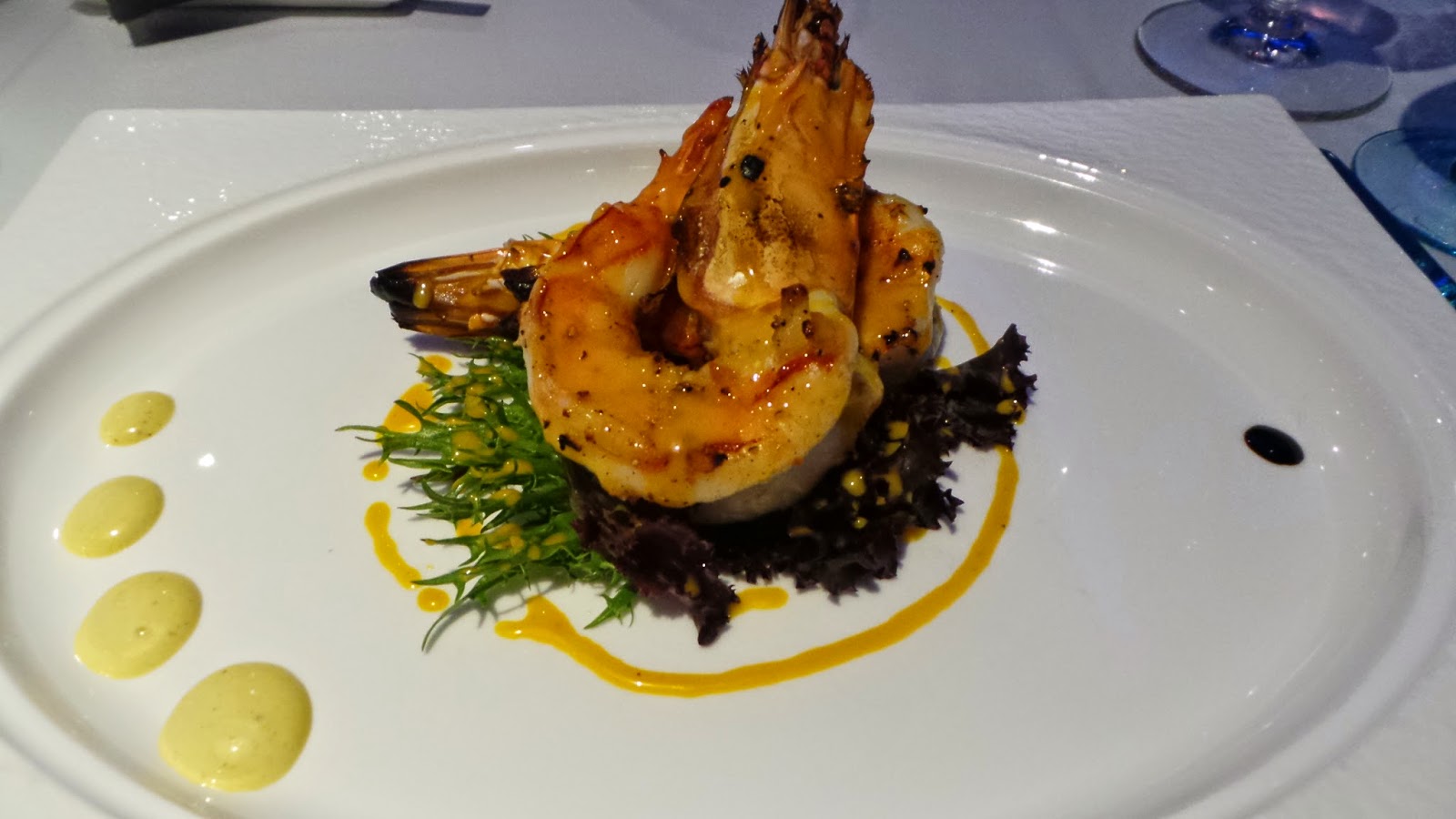 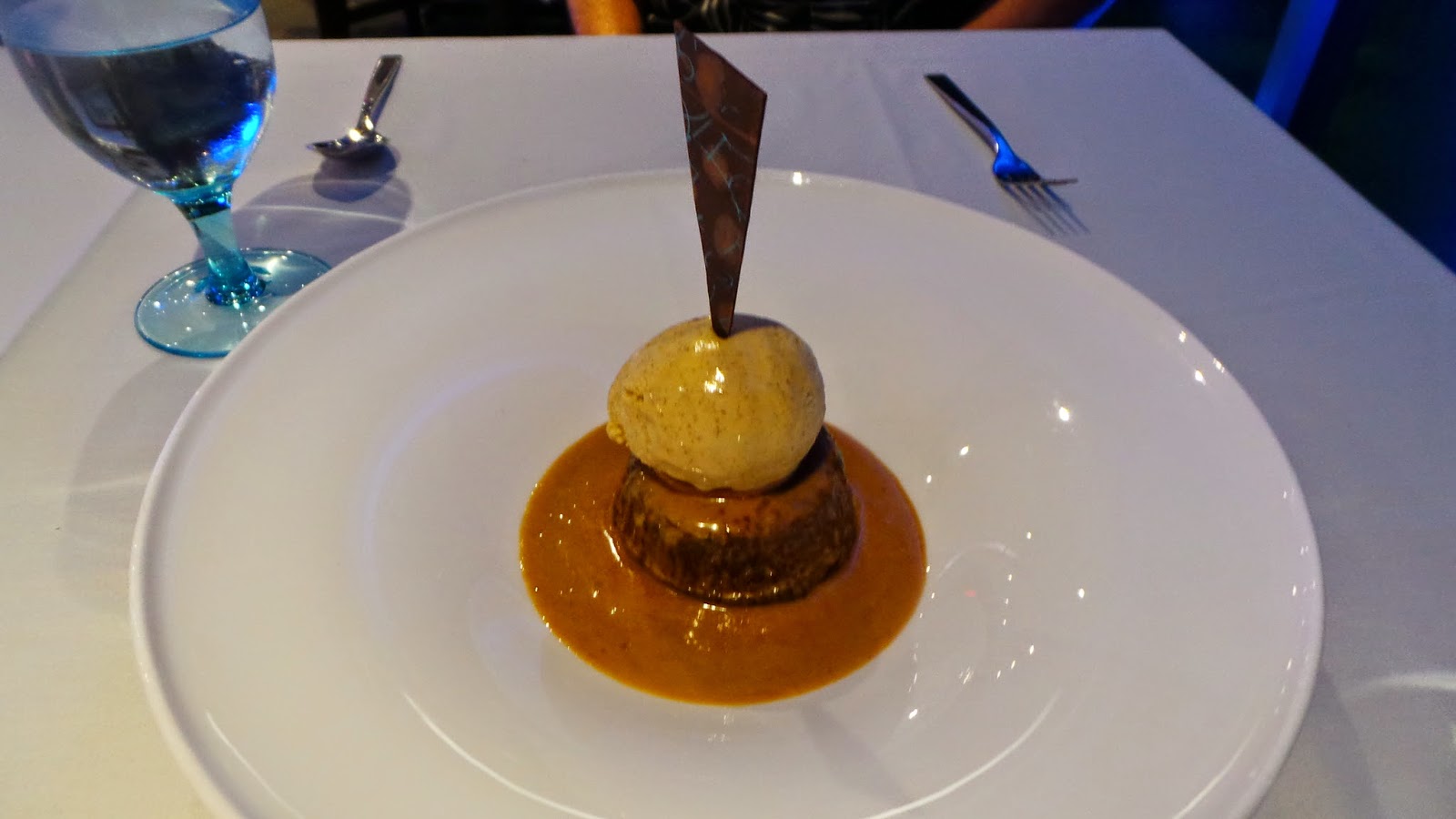 The one thing we missed (my fault) was renting jet skis.  The hotel deliberately omits them as part of their offered water sports (they don’t want the noise directly in front of the hotel), but they were available a short walk away.  “Never put off ‘til tomorrow ..” came true on our last day when the water was too rough and so we missed our chance.  Lesson learned.

I’m again singing the praises of American Airlines after our flight home on a brand new Airbus 321S.  As with the outbound flight, I spent extra for the premium seats in coach, and selected an exit row seat with nothing in front of me.  This plane has new entertainment screens on every seat-back (mine had one that lifted up).  The selection of programs isn’t free but for $5-8, there was a lot to choose from.  The electrical outlets were a great addition as well.

At the end of a stay, we always debate whether we would return.  Even if the answer is no, that is not meant to be a negative assessment. With so many islands yet to experience, the choice would be to go somewhere different and definitely stay at a smaller hotel.

Turks and Caicos, anyone??

Teri B.
A VISIT TO THE CAYMAN ISLANDS — HAVING NOTHING TO DO WITH HIDING FUNDS!
THE FRENCH LAUNDRY — PARTY OF 4; OTHER STORIES FROM THANKSGIVING IN NAPA