U.S. TravelWining/Dining
Teri B.9 years ago681 views
Which is the smarter and more economic choice:   Let the remaining funds in your Southwest account expire, or use the funds but spend  even more money by taking a trip somewhere?  In other words, do I spend more money to save the unused $200? Hmmm, that is an interesting question.

Well, I hate to see anything go to waste, so a short trip was planned to San Francisco over MLK Weekend. The said funds got gobbled up with the new flight reservations. Now it was time to find yet another hotel room while trying not to ratchet this up into a “do we really need to take another trip” expenditure — if travel could ever be considered as such.

In the quest to find accommodations, some interesting things occurred. Since I have points with two hotel loyalty programs (Marriott, which includes The Ritz Carlton, and Starwood),  I will go first to those sites and see if there is a property that works for my criteria.  Having previously stayed at the SF Ritz Carlton, and having points in my account, I decided to mesh the two.  And bingo — I received a confirmation that was, in hindsight, probably too good to be true:  2 nights in a Club Level King for points plus a grand total of $230. Who wouldn’t want to go for that?

Nearly a month later, and 5 days prior to departure, I was alerted via email to the fact that the points in my account were insufficient to cover this stay. Now why wasn’t that indicated at the time of booking?  After all, when you book a flight with miles or points,  all fees and taxes are due at the time of booking. After telling the hubby we weren’t staying at the Ritz after all (that wasn’t a good thing), followed by numerous phone calls to central reservations, here’s what I learned: This particular program allows members to earn the points needed up to a certain pre-stay deadline, and then you need to pony up.  If you don’t have the necessary points, you may purchase them at that time.
So now the cost of this trip has really started to climb … I won’t bore you with the details but, because of some “courtesy” points awarded after climbing up the management chain until a satisfactory resolution was achieved, we used points for one night and booked a standard room for the next (the additional $$ for the Club Level just didn’t make sense in this scenario). And after a nice chat with the hotel G.M., of course the internet was comped …

Upon landing, it was straight to lunch at Chez Panisse in Berkeley for our usual fix, which was as delicious as ever.  Our companions were niece (with hubby) & nephew Bialosky (all East Bay residents), who kindly furnished transportation from Oakland to Berkeley and even into SF.   That was a treat as we got to spend more time together.


After checking in and then browsing around Union Square, we were off to a terrific dinner at Michael Mina. I instantly thought the restaurant looked familiar; indeed, we had been there in its former incarnation as Aqua.  Not to mention it is next door to another SF fave, Perbacco.  A sampling of “smaller” starter courses were all unique and quite delicious.  The absolute killer was the amuse, a tiny triangle of a grilled cheese sandwich with a taste of amazing of leek soup. 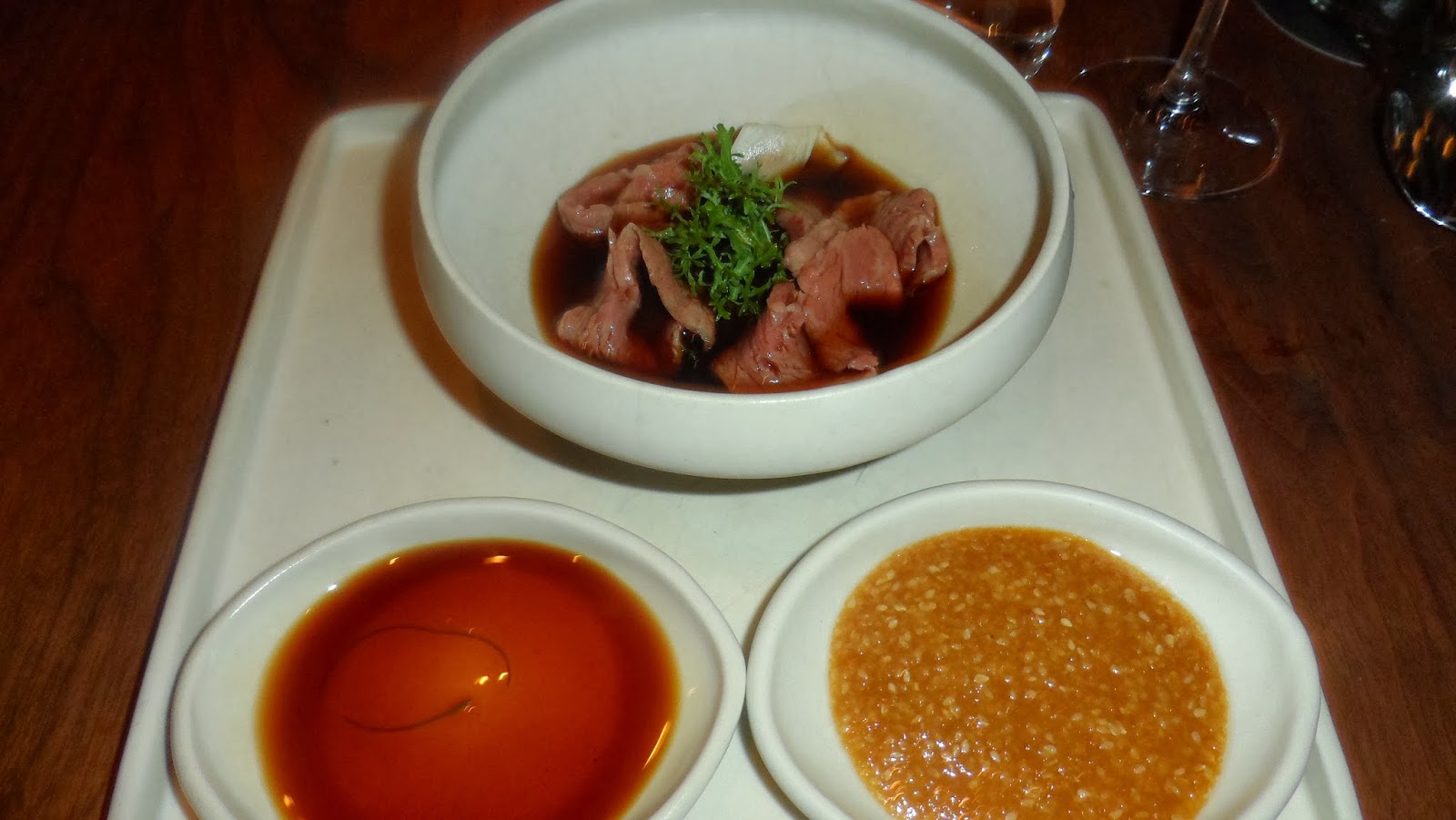 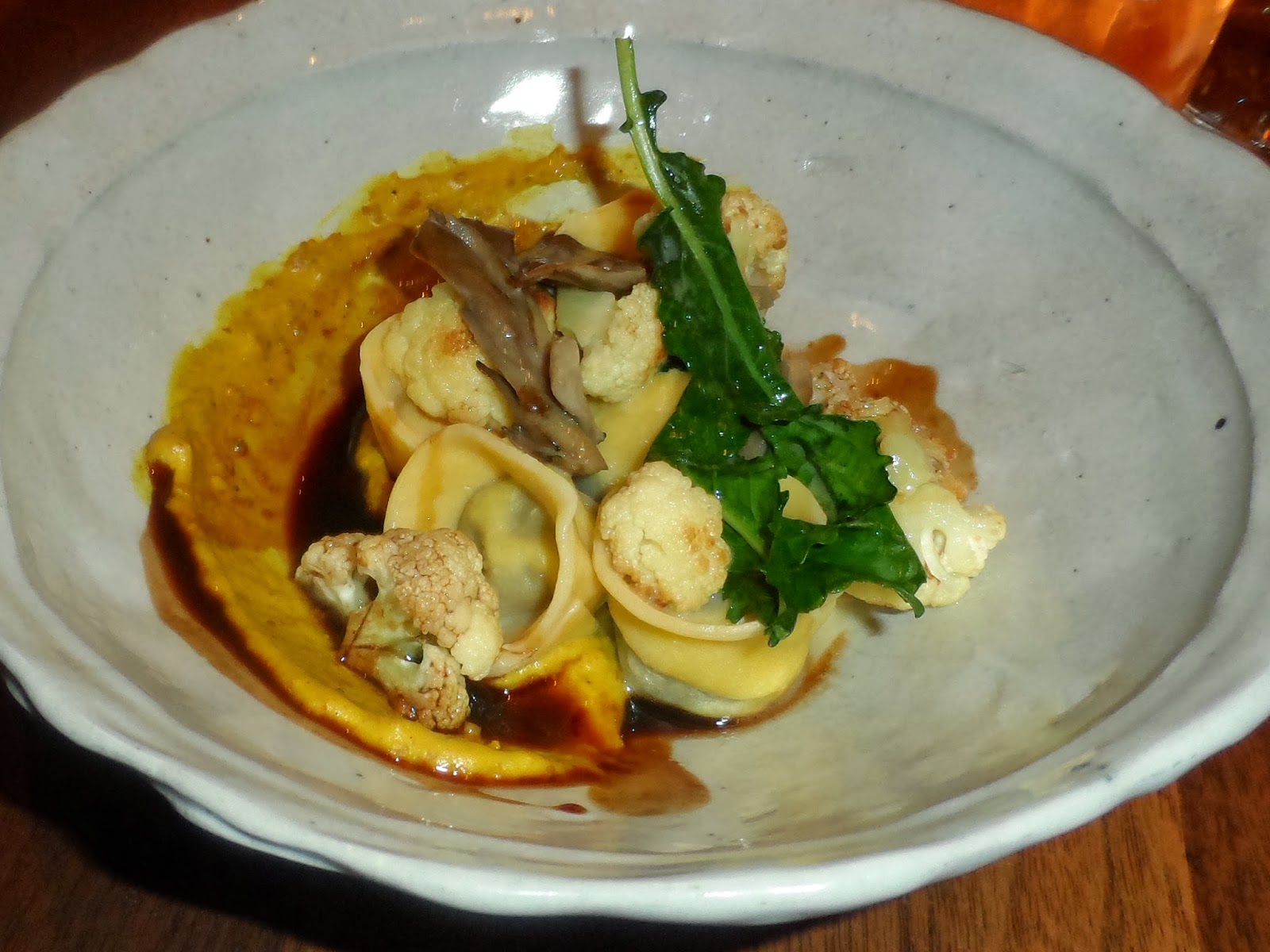 At the end of the meal, we had a lengthy chat with the manager, a young gentleman of Korean descent, who shared with us that his parents were having trouble coming to terms with his career choice in the hospitality industry (“what do you mean you’re not going to be a doctor?!”). Given that many of his college friends are still unemployed, there was a lot to be said for his opportunities. He was obviously well trained, as there was an email awaiting us by the time we got back to the hotel, thanking us for dining at the restaurant and inviting us to let him know if we intended to try another in the Mina group.  Smart young man …

Here’s something else to ponder:  Is it better to plan out all the activities and eateries in advance so as not to miss anything, or simply go with the flow? I was absolutely delighted with the outcome of spontaneity the following day.  A nice (downhill) walk brought us to the Ferry Building — well known for the thrice-weekly Farmer’s Market — but also open daily with some wonderful shops and restaurants.   We had lunch at The Slanted Door and this is a gem. With gorgeous water views on this perfectly clear day, we enjoyed their inventive Vietnamese food — even managing to mostly avoid cilantro, ubiquitous in this cuisine, but at the top of my dislike list. 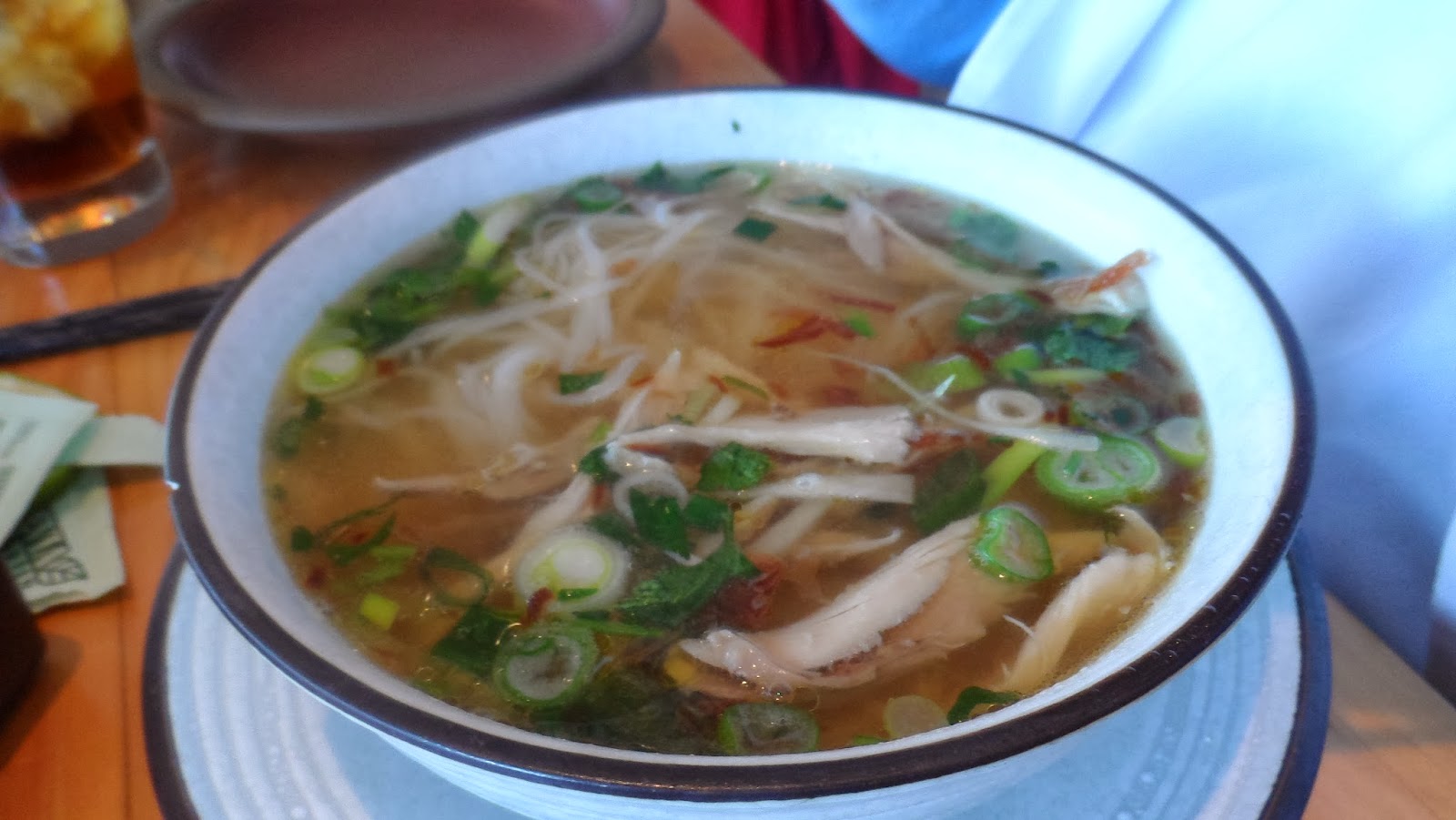 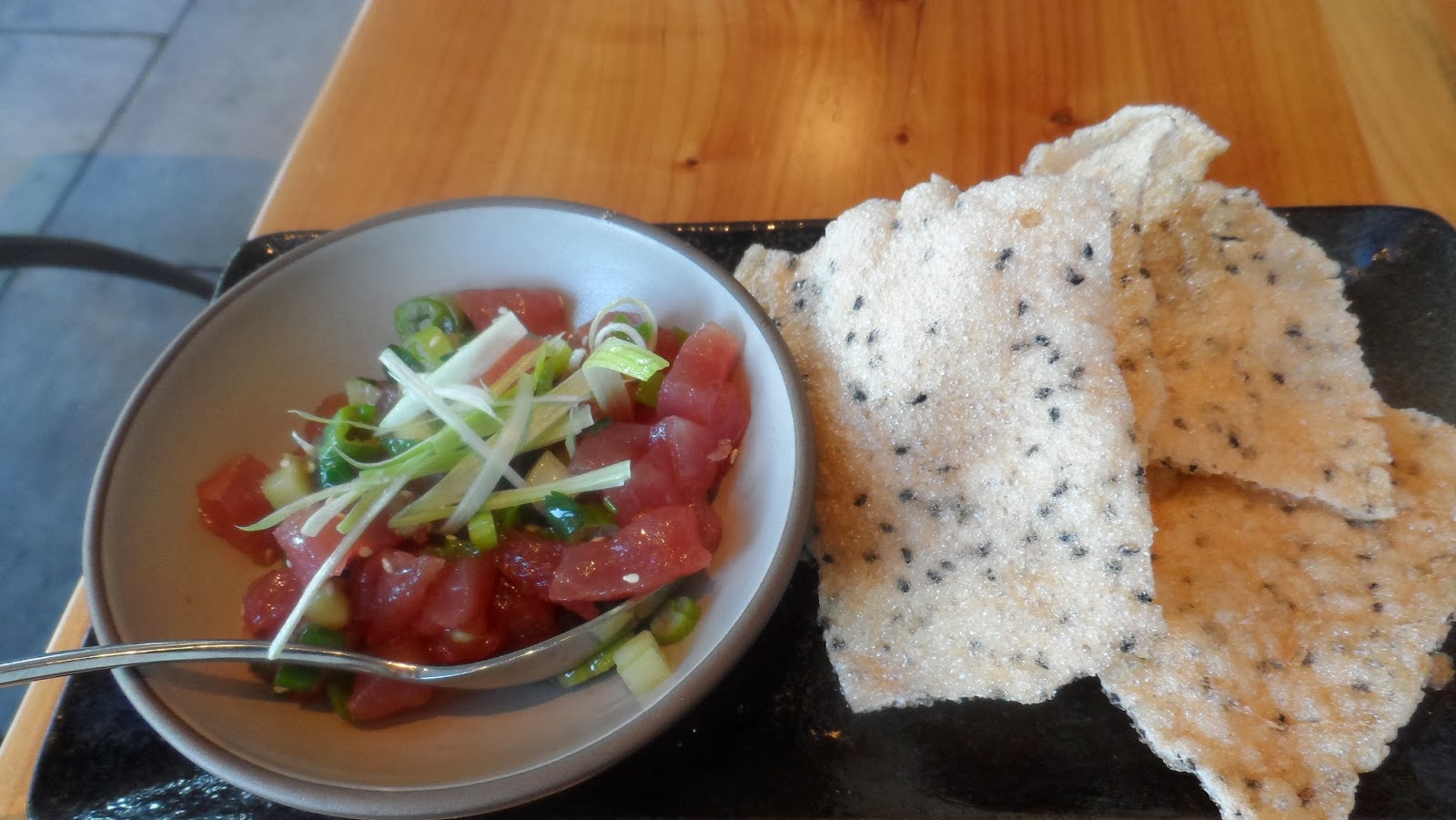 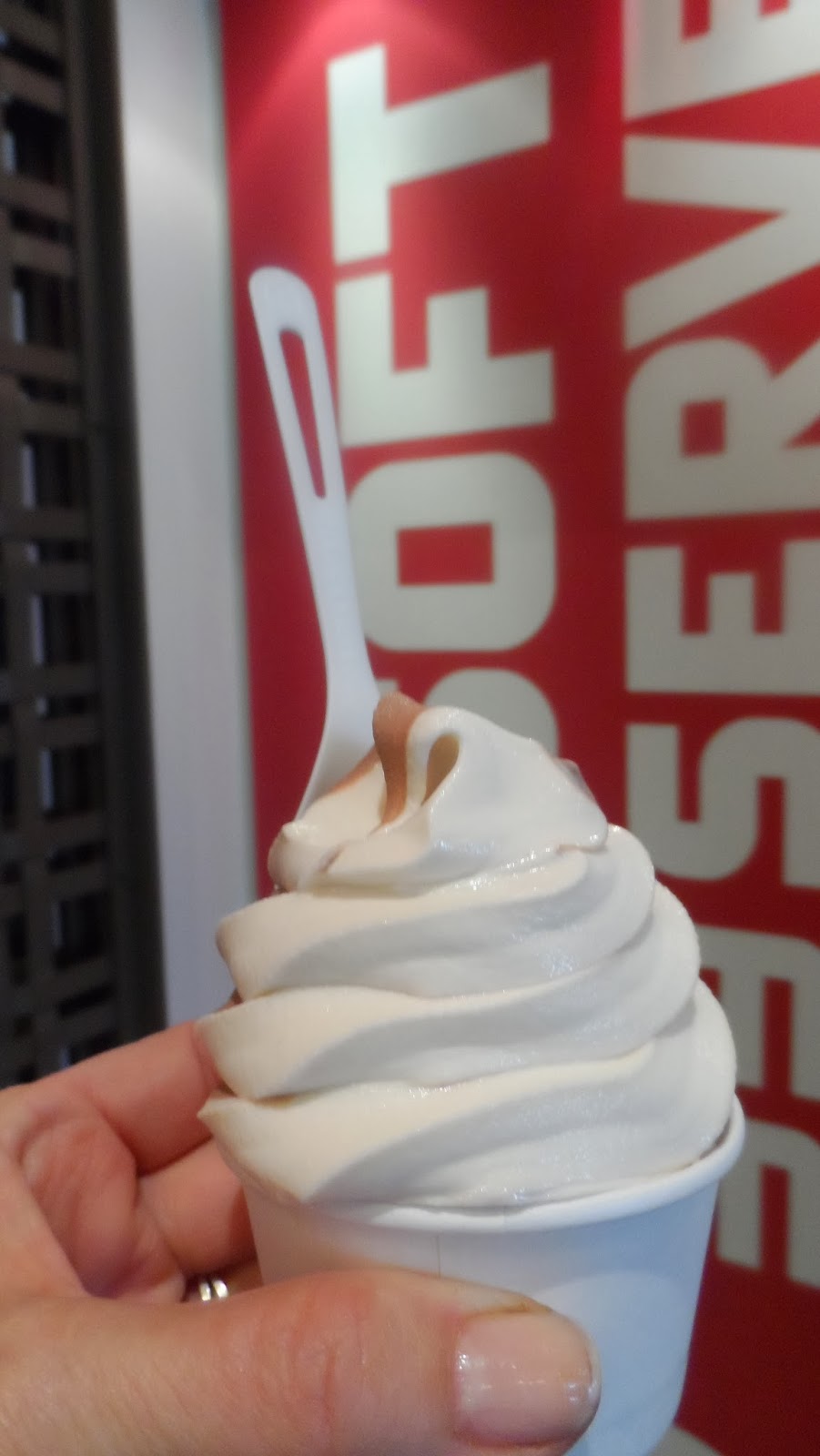 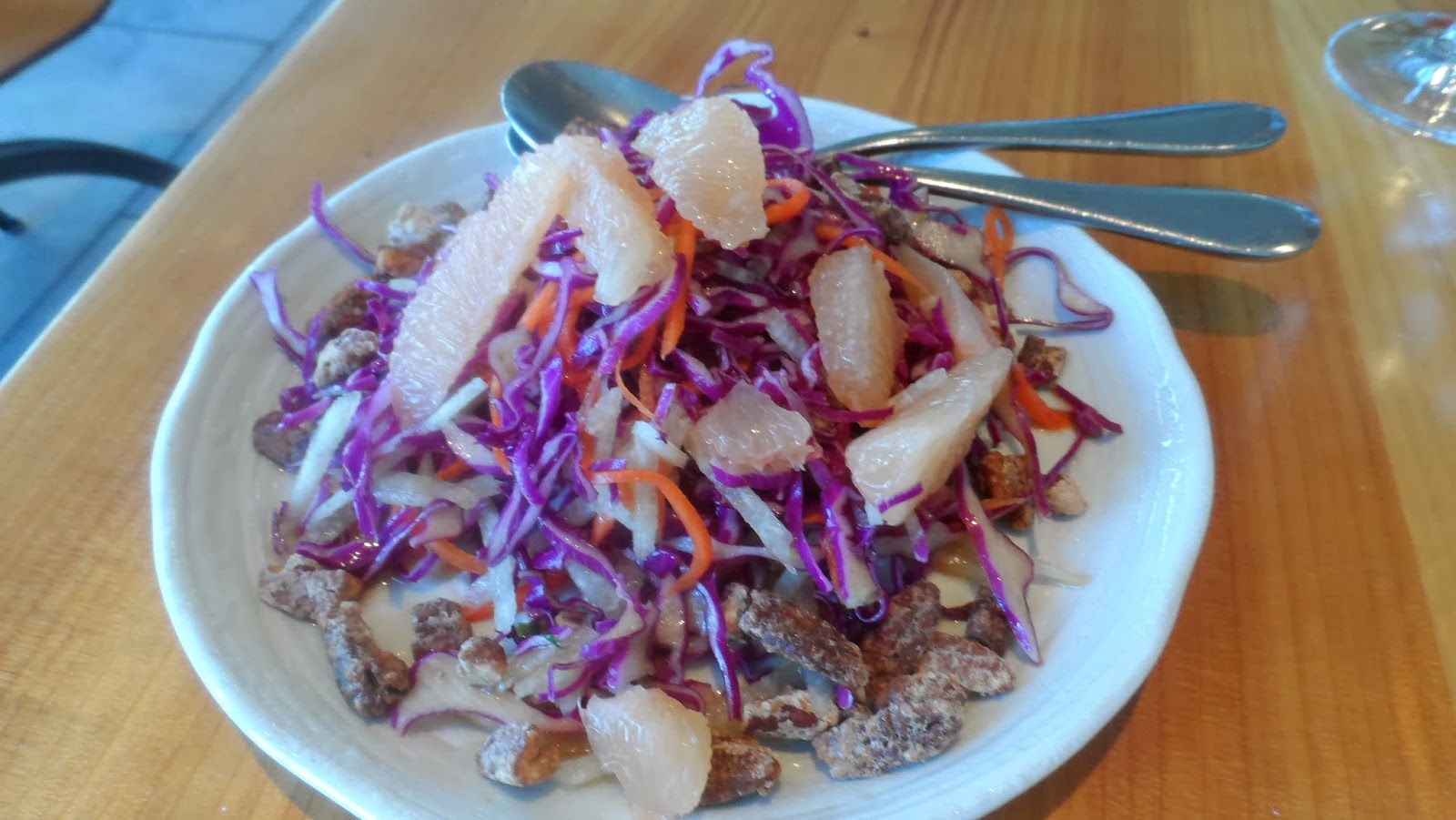 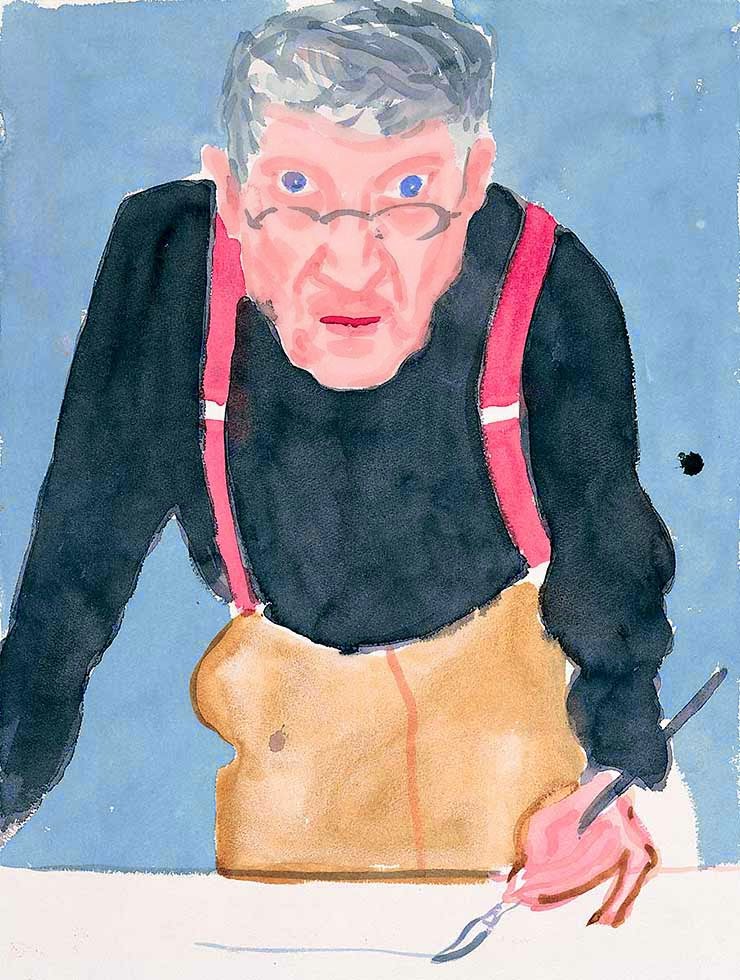 From there it was all the way across town to Golden Gate Park and the Fine Arts Museum of San Francisco for the next-to-last day of the amazing David Hockney exhibit.  Fortunately I bought these tix online the night before as the exhibit was nearly sold out for every 15-minute time slot, and it was packed. Read all about this remarkable show, especially the video presentations.  Wow!


Back to the hotel to watch most of the game that was electrifying the city .. well, at least until the disappointing outcome for the local folk.  That would be the SF 49’ers failing to make it to the Super Bowl by losing to the Seattle Seahawks.  (I guess those in the know weren’t surprised at the ultimate outcome on Feb 2, where Seattle proved to be quite the superior team this year).  We walked from our hotel to Little Italy for a good but not great dinner at North Beach Restaurant, and were just about the only patrons for the first half hour.  At that point the place filled up with one after another long face.  Alas, their dreams of a second consecutive Super Bowl appearance were dashed. As hardcore L.A. (Dodgers) fans, we decided to keep our glee to ourselves (gloating is so tacky). The walk on Stockton Street was most interesting, where the culture literally changes in the space of a 4-way stop at Vallejo Street, from Chinatown to Little Italy .. from steamed buns to raviolis!
Another gorgeous day, another walk, another lunch … and it was back across the bay via Bart to Oakland to Burbank.   A short hop and a most fun couple of days.
Teri B.February 9, 2014

Teri B.
THE FUNNEST BIRTHDAY PARTY FOR ANY AGE!
THE ULTIMATE JOURNEY