As we travel along on this journey, our next stop is Lake Como.  The inevitable “oopsie” finally occurred.  Blame should be squarely placed on Tim, our mostly accurate GPS voice, who has ably guided us along.  But he just blew it.

After an easy ride from Zurich to Lugano, which is just north of the border between Switzerland and Italy’s lake district, we stopped at the outlet mall.   That part was fine and who knows if our perceived “discounts” were really that, but it always seems more fun to shop when on vacation (at least for me).
We left there for what we remember was a relatively short ride to Lake Como (Cernobbio to be exact) and that turned into a two-hour journey on narrow roads, in the rain no less — think California’s Highway 1 but with Italian drivers.   At one point we were so lost we ended up on what we thought was a road but probably more like a dead-end alley that was so narrow we couldn’t have gotten out on either side of the car even if we wanted to.  Did I mention it was raining?

So put the car in reverse gear to attempt backing our way out and the warning sensors are going crazy — too close on the left, then too close on the right; Bruce finally gets out and is directing me, a lot of hand-waving and various gestures … Obviously the story ended well but couldn’t wait to crack open a bottle of wine, for sure! 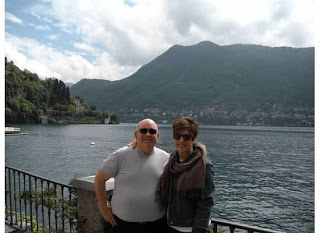 Can’t complain too much; after all, this is Lake Como  — surely one of the most beautiful places on the planet.  No George Clooney sightings in answer to your next question; of course we (George and I)  have both resided in Studio City for 20 or so years, and no encounters there either.

So after a couple of rainy and lazy days in Lake Como, we are now in Geneva.  Where Zurich is much more of a German influence, Geneva is a very French atmosphere (it is almost totally surrounded by France). This is an incredibly elegant city with a lot to do! We went barely 20 minutes outside the city to Domaine de Chateauvieux, a two-star restaurant worth EVERY calorie.  All you foodies, look at the pix of the amazing food … one more day here and on to Baden-Baden the day after.