Things You Should Know
Teri B.5 years ago637 views
You know how one has that sinking feeling that something just isn’t going right?  Well, my suggestion is to always trust your instincts because you’re probably on to Something …

My initial clue that flying round-trip from LAX to Boston on Virgin America was going to be problematic was not being able to check in online due to their website problems.  A phone call to the airlines was required, only to be walked through their myriad choices.  Finally success achieved.
Upon boarding, I was asked by the attendant if my small carry-on needed to be stowed.  He suggested I take the first available bin.  I said, “Would you help me lift this?  I have a sore arm.”  His reply:  “So do I.”  Upon which the nearest passenger stood up for the assist.  The flight proceeded fine, although another attendant was quite snarky … where’s Southwest when you need them?

The return was the nightmare.  First, no email received:  “It’s time for you to check-in!”  No pre-flight alerts that had been signed up for just days earlier.  Unable to check in online.  Another call to the airlines left me uncertain.  She just didn’t exude confidence upon confirming our reservation was indeed there, including exit row seats (extra $$) and pre-paid baggage fees (3 x $25 ea).
At the airport (we arrived 4pm for a 5:50 departure), we were told 1) It was too late to check our bags because the plane was departing at 4:40; 2) We were still in the record for the now non-existent 5:50 flight but nowhere to be found in the 4:40 flight; and, 3) only a supervisor could do anything.  So where’s the supervisor?  He’s with another customer; he’s on his way; he’ll be here in five minutes; he’ll be here in four minutes; he’s at the gate; he’s still on his way, etc., etc.
Some 45 minutes later, said supervisor arrived.  The only option at this point (east coast flights were still reeling from the various hurricanes) was Boston-JFK-LAX on JetBlue.  We check our bags and clear security. Except at the JetBlue gate, we learned we had missed our takeoff window due to fog rolling in.  With the now-delayed departure, we’d miss our JFK connection.  Another 45 minutes in line at the “Just Ask” counter yielded basically no solutions.  We even considered renting a car, driving to NYC to make the first-out flight from JFK at 6am.

And then our savior appeared from the heavens in the form of the JB gate attendant.  To summarize, we split the reservation so son Sam and daughter Hannah could leave that evening on a non-stop JB flight, arriving at about 1 a.m. — at least they could get back to work.  The hubby and I would get a room at the airport ($230 for 7 hours) and fly out the next morning at 7 a.m.; arriving around 10:30 a.m.  Where the hell were our bags?  JetBlue had the tags and promised delivery to our home Monday afternoon, which promise they kept.
The aftermath?  All of these gory details were conveyed to VA via their website.  Full disclosure:  I did receive a schedule change back in July, found in my trash email.  Yet VA kept us on the non-existent 5:50 flight which they confirmed to me multiple times and never transferred our reservation when they changed the schedule.  Thus we wouldn’t have gotten on the 4:40 flight no matter how early we arrived.  After two weeks of back-and-forth emails, we were provided $500 in credit toward future flights.  I can hardly wait to experience the airline again.  My Twitter wrath is below … of course, the promised email never arrived. 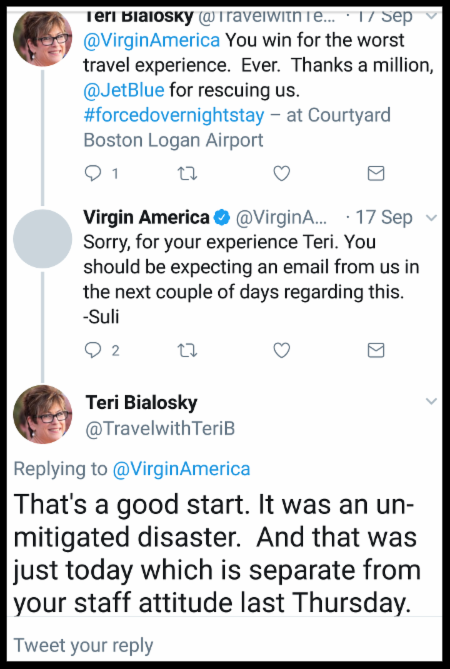 Teri B.
VETERANS “STAND DOWN” AT 3RD ANNUAL EVENT
A LOCAL GEM