International Travel
Teri B.5 years ago771 views
The annual privilege of uttering three favorite words for the hubby and me arrived April 18th: “And we’re off!”  And where to?   First (and first visit) to India; southwest to the magnificent Maldives; east via flights through Sri Lanka and Singapore (been there but no time to stop this trip) to Western Australia to visit Perth and exploring the wine area; finally north en route back home with roughly 26 hours in Hong Kong (i.e., plenty of time to do damage). 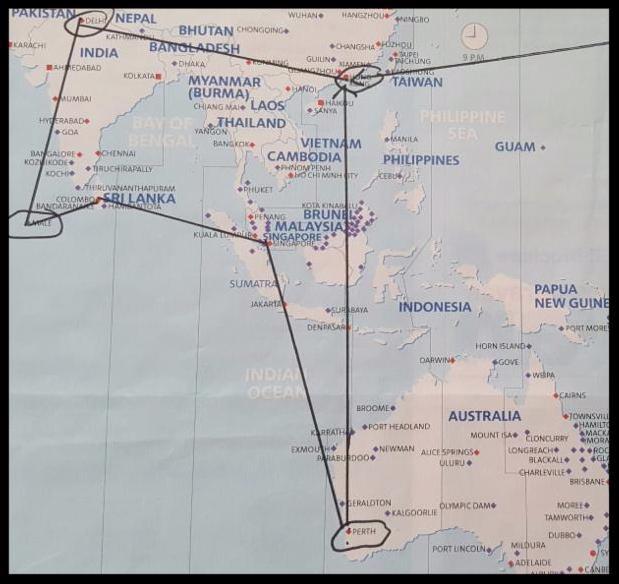 How was the decision made?  Bucket list?  Yes, in the case of the Maldives (anybody NOT want to go there??).  As for India, that became much more “doable” upon learning that the company used for last year’s African adventure — the sensational andBeyond — also specializes in India.  As for Perth?  The hubby has a client whose family is in the wine biz there, so voila.  And it’s not much further traveling there from where we were than if you were heading west from Sydney (visited in 2010, along with Melbourne, Cairns and New Zealand). I mean, once we were already in the “neighborhood,” why not?
As for the India details, we’ll concentrate our time in the area known as “The Golden Triangle” shown below. 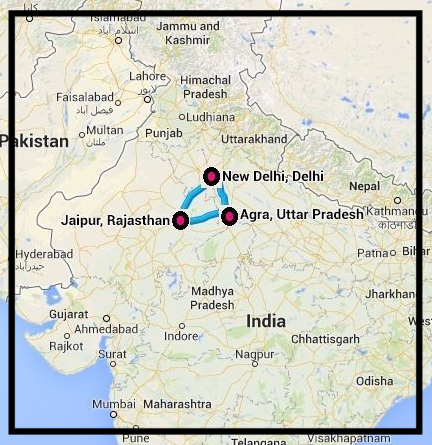 The hubby and I tend to make the big spring trip just the two of us.  For this one, we’re very happy to have Aunt Judy Stone joining us from New York.  This is Judy’s first India trip as well. While she and her husband are avid travelers, he is among many who have no interest in India.   Remarkably, Judy’s eastbound flight and our westbound flights arrived in Delhi within minutes of each other. Wonders of modern air travel!  We’ll have a fascinating 10 days together before she heads home and we proceed on our way.
After a “swift” 23 hours total (LAX-Hong Kong-Delhi), we were transported to the Lodhi Hotel on the border between the old and new sections of the city.  A beautifully modern structure, with a plunge pool standard for all accommodations, we were happy to arrive and greet Judy in the 2-br suite.  The hardest part is acclimating to the local time (+12.5 hrs from LA).  The goal for day 1. is a bit of sightseeing, a trip to the spa, and early night, then progressively gearing up. With the heat index at 110F, that was all any of us were up to doing. But, you know, at least no humidity …
Clockwise from upper right:  In the Lodhi Hotel lobby; Humayan’s Tomb built prior to the Taj Mahal but also as a shrine to a spouse; War Memorial; President’s residence
A quintessential experience of India was the visit to the Old Dehli marketplace and Spice Market.  I’m no lover of 100+ temperatures with wall-to-wall vehicles and people, but this was not to be missed.  Our guide told us that, appearances notwithstanding, many of the “stores” have been been in the same family for generations and provide quite a nice living.
Teri B.April 21, 2017

Teri B.
A DAUNTING DECISION: WHAT CAMERA SHOULD I BUY??
THE ROAD FROM DEHLI TO AGRA (Part 2 in a Series)