International Travel
Teri B.6 years ago755 views
It’s no secret that Cabo San Lucas, just a two-hour flight southeast of LA, makes for an ideal getaway. What’s astonishing is the massive growth that continues to occur unabated.
The hubby surprised me for a major birthday back in 2004 with the first trip to Cabo. The locals were thrilled that the first Costco had just opened up, and they could purchase essentials like bread and milk for significantly less than the area markets.  We stayed at Las Ventanas which was a splurge to say the least. Infinity pools were unique back then so entering that gorgeous resort seemed staggering as the pool “fell” into the ocean beyond.
The next trip was for our daughter’s graduation in 2009.  At the time, the area was just desolate due to fears of kidnapping and the like.  We had a great time and never felt the least bit unsafe.
Flash forward to 2017.  Unlike the first trip where five-star properties were just three — Las Ventanas (Rosewood), Esperanza (Auberge) and One & Only Palmilla — there’s now La Pedregal, The Montage, The Cape and a Ritz Carlton still under construction. And that’s just the high end.  The growth is at least 10% annually, and up to 20% at times.  Three thousand rooms will be added in 2017.  During the high season (November through May), there are sometimes 40 commercial flights on Saturdays and Sundays. 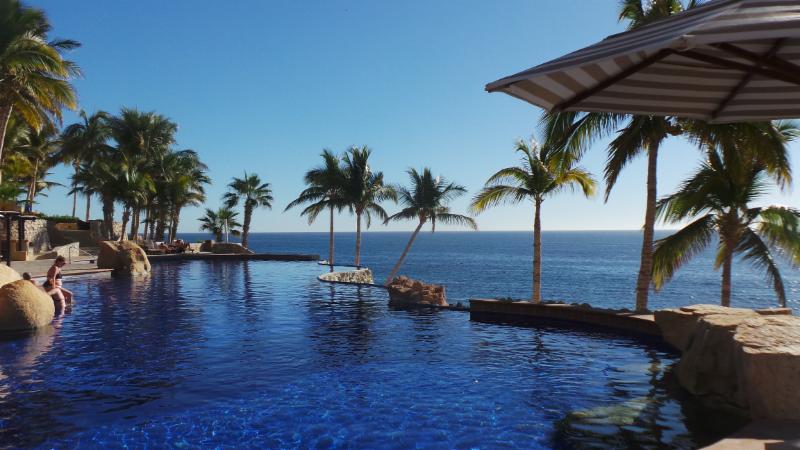 It’s not just the high end experiencing growth (multi-million-dollar vacation homes), but the huge amount of “all-inclusive” resorts that are very affordable and abundant.  This trip was the result of purchasing a three-night stay (at a charity auction) at Fiesta Grand Americana.  Personally I am not a fan of all-inclusive — typical of cruise ships and the like — where one almost feels obligated to indulge because “it’s free.” I’d rather think twice about consumption while paying as I go. To each his own. 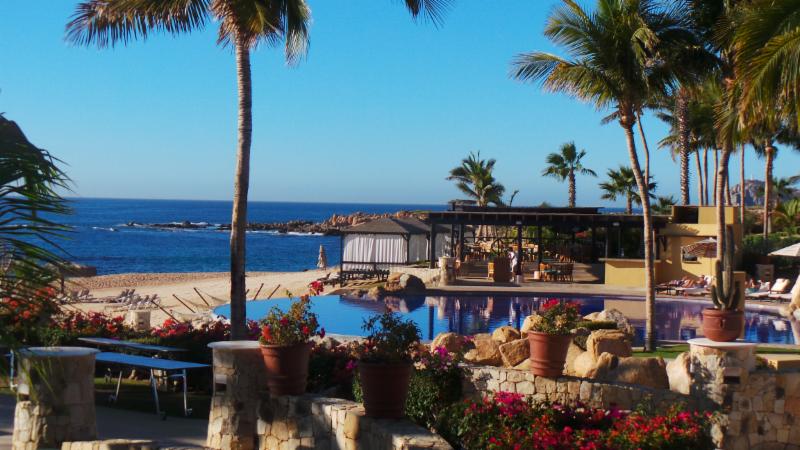 So what to do in a short time span?  Visit the spa!  An 80-minute deep tissue for $90 works for me (after some sort of discount plus gratuity).  But the big outing was whale watching via Cabo Adventures ..
We were given the choice of either a small but very fast boat (which was like a life raft) holding 26 plus 3 crew, or a very large double-decker.  We opted for the small one, which adventure was called “Whale Safari.”  Having experienced an African safari last year, I get the connection:  both vehicles go very fast and communicate with other vehicles when game (in this case whales) are spotted. This thing flew over the water! No wonder we were asked if we had any back issues beforehand; I was indeed reminded of the safari jeeps.
It was worth it to catch multiple glimpses of these beautiful creatures, both full size and young-in’s.  Taking photos is challenging, as the action is swift and the boat rocky.  But you get the idea .. happy I got just one! 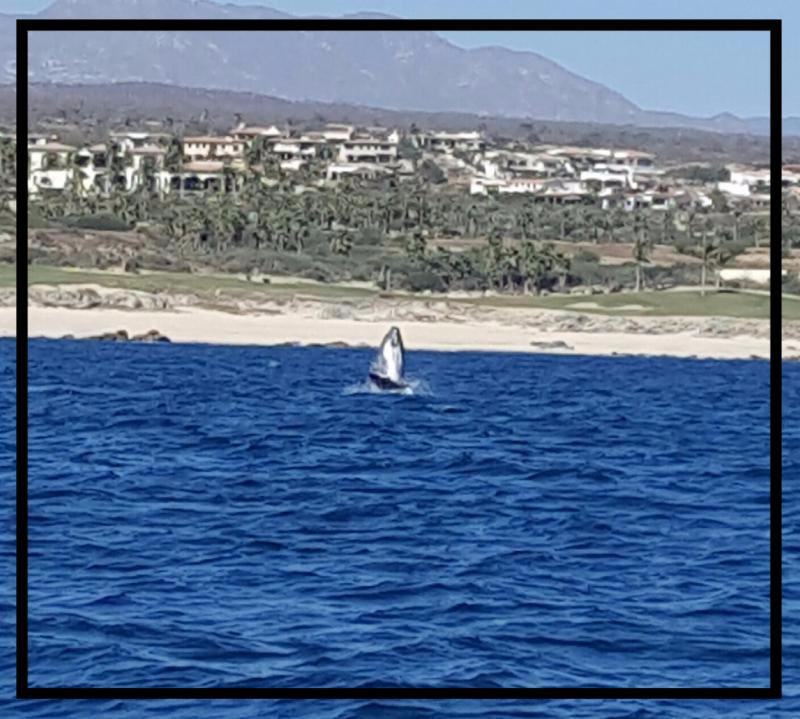 Absolutely worth mentioning are the following restaurants: Los Tres Gallos was a last-minute decision that was amazing. Delicious food, with some unexpected twists, in an indoor/outdoor setting.  We also loved Mi Casa, with traditional fare in a lively atmosphere.  Both spots are in downtown Cabo, close to the marina.
Mi Casa had fabulous margaritas (mango in particular) plus carnitas

Teri B.
THE LONG ROAD TO A GRAND OPENING!
FINDING JOY IN PLANNING TRAVEL