Things I LoveWining/Dining
Teri B.7 years ago697 views
“Guess what I want for this anniversary (#29)???”  The hubby’s eyes had both a sense of dread and a look of “what could you possibly ask for now?!”  This one is a simple and inexpensive request (for once!)  “Let’s take the Red Line (LA’s public transport) to downtown and explore (and eat at) Grand Central Market,” which is something I’ve wanted to do forever.  Last year, we had an LA Staycation.   Next year is a big one with a very big trip to Africa. So this year: just a really fun day …

The Red Line opened 22 years ago, and that is how long it has taken me to ride it for the first time.  I am certainly not adverse to public transportation, as I take it all the time in other cities and countries. It is obviously not a matter of location, as the closest station is a five-minute drive.  The station opened in 2000, across from Universal Studios/theme park/Universal City. I found that it is convenient, quite clean, and certainly inexpensive ($3.50 per person r/t, certainly less than parking fees downtown). And in little over a month, the hubby qualifies for a senior discount …

The train ride from Universal/North Hollywood station to Pershing Square in the heart of downtown was roughly 20 minutes. Fun fact:  the distance from Pershing to the Market is less than the distance of a home run at Dodger Stadium (395′) — which is among the many fun facts on the clever market website. 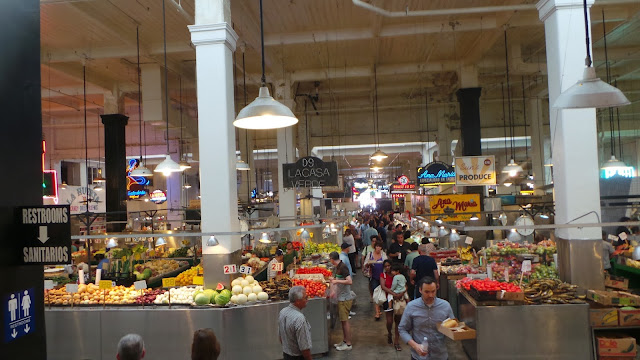 The market was bustling with lunch traffic by the time we arrived.  The line at first-choice Wexler’s Deli was long so we grabbed counter seats at Olio and ordered two of their wood-fired pizzas and a salad. Interestingly, even though we ate there, they do not offer any plates — everything is served in the same type of box/carton used for take-out. The margherita was good, but not great; the pepperoni among the best I’ve had. They have a regular restaurant in the Grove/Farmer’s Market/3rd Street area of L.A., not far from our office, so I see a visit there soon. 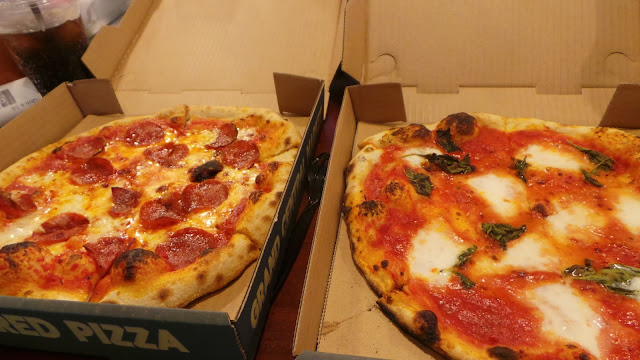 After strolling through the different aisles (working up an appetite), we happened on DTLA – a purveyor of gourmet cheeses.  Aside from buying cheese, they offer a few sandwiches and salads.  Grilled cheese? Can’t pass that one up. Three assorted cheddars on pan-de-mie (brioche) bread from BreadBar, lightly buttered, is put on the flat top grill, then in the extremely hot salamander, then back on the flat top loosely covered with a pan, and finally cut in squares before serving.  It is out of this world. 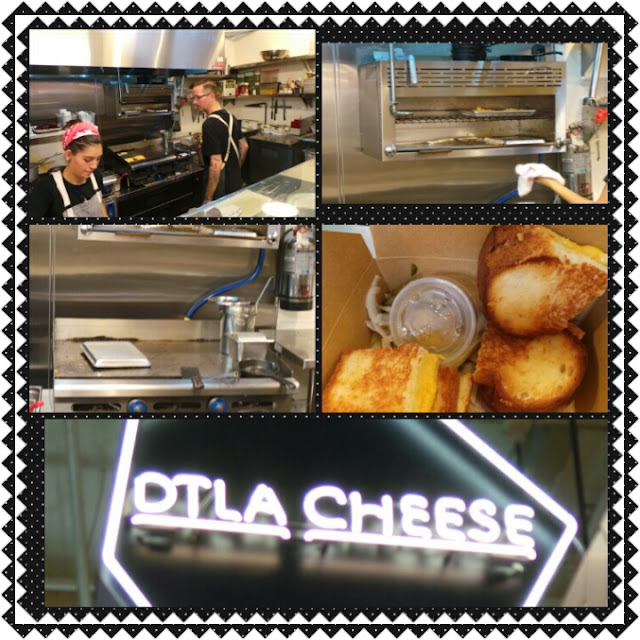 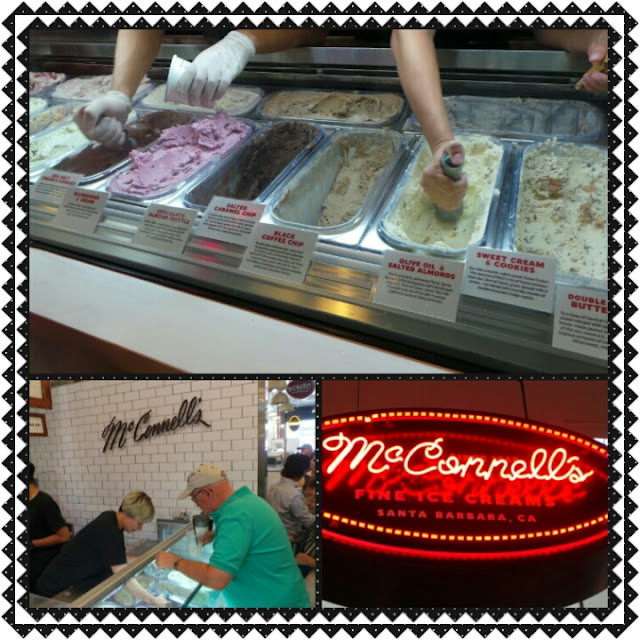 We had to try the aforementioned Wexler’s — Micah Wexler is an alumni of the Milken Schools where our kids went and we had heard he has very serious deli food. We bought a couple of sandwiches to take home and consume during the evening’s Dodger game (won against the Giants in a walk-off — the perfect gift). Top-rate, hand-sliced corned beef and pastrami (below), but oddly tart coleslaw.  Definitely would go back there.

Here are my observations of LA’s public transportation: 1. Not enough parking at the station — but when you do find a space, it is free.  We nearly bagged the whole trip but finally found a spot in an adjacent lot. 2. There are no bathrooms in the station. I found that surprising.  3. The train itself was fine — at least going. On the way back, there was absolutely no air — sort of like being in Bangkok.  We were drenched by the end of the ride.
Most importantly:  4. I am grateful that I have the option of taking the train instead of it being my only choice. I can choose to hop in my very nice car any time I want to, without the concern of paying for gas and parking that others have. Anyone who thinks LA is only a sea of affluence (and much of it is) should be required to ride and see what much of our population really looks like. 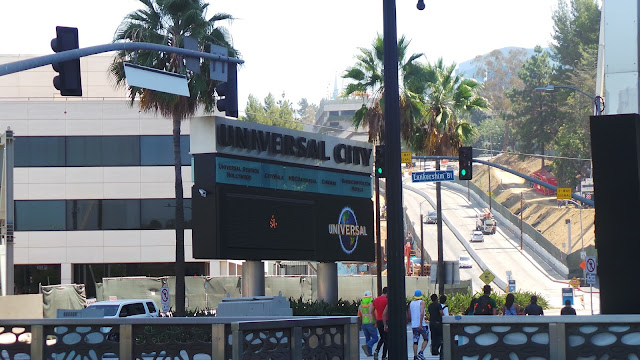 If you’re inclined for an out-of-town romantic getaway, herewith are 50 suggestions from a Travel & Leisure column … whatever you do, enjoy!

Teri B.
CULTURE IN LOS ANGELES – TWICE IN A WEEK!
THE GIRLS TAKE MANHATTAN: BROADWAY BINGE