International TravelThings You Should KnowWining/Dining
Teri B.9 years ago689 views

I love Seoul!!  No doubt it is the contrast from having just left Beijing’s archaic airport (at least in the air–deprived terminal from which we departed) to the gorgeous, modern, and supremely efficient Incheon where we arrived barely 1:40 minutes later.   In fact with the proximity so close, I would advise travelers to Asia to include South Korea on any itinerary.

Our driver (pre-arranged with the hotel) was duly waiting for us in a beautiful Hyundai sedan that would rival a 7-series BMW (more about the great Korean-made cars in a bit).    Arriving at our hotel even at a late hour, one could see the vibrant and modern area of Gangnam, with lots of interesting architecture and multiple coffee houses on every block.  And seemingly everyone was using a Samsung (Korean made) Galaxy phone with Android technology, which products run neck-and-neck with Apple here.  The screens are so large; cannot wait to get one of those …
I had arranged for half-day tours for our stay, and the next day we were pleased to meet Adele and Kim, guide and driver respectively.   Off we went to our first stop of an old/new traditional village of just 900 houses, some of which have maintained their original architecture while many had been modernized, and the buildings were interspersed with art galleries, tea houses and, of course, coffee houses!  In speaking with Adele about the different Korean cars and how popular they are in the U.S., I mentioned that my sister Margie drives a Hyundai, to which Adele said, “Margie!  Like the Simpsons!!”  Well, actually that is Marge Simpson, and my sister’s hair definitely is not blue …

From there it was on to Insadong, a fairly long street of shops, touristy stuff, street vendors and the like that is foot-traffic only on the weekends.   The hubby went to exchange currency there … I mention this because there was zero problem with the Koreans accepting a US $100 bill that had the tiniest tear in it  – which same bill was rejected (along with 2 others) in China.

We walked to one of the only temples located in the “downtown” area; it was in serious preparation for the Buddhist Lantern Festival which takes place every May. 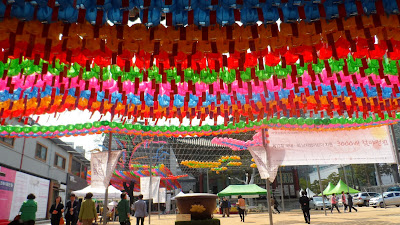 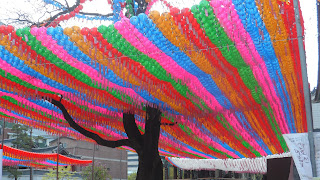 We were told a month is required to hang all the lanterns and the evidence was beautiful and clear … Hard to see from the pix, but the lanterns are bought by individuals which then entitles you to write a wish or prayer on the attached tags.

This was an amazing sight .. 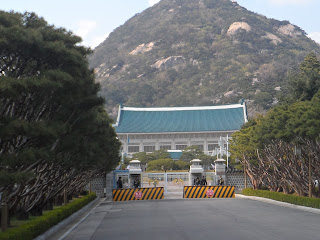 We were taken for a quick look at the Blue House (Korea’s White House) and then to a beautiful cultural center and a former palace – now symbolic only – where we saw the changing of the guard.  This is reminiscent of things long since past.

Finally we made a stop at the Cheonggyecheon – 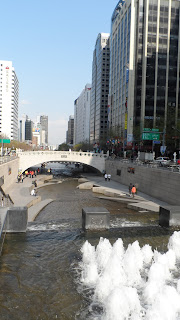 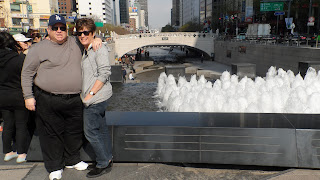 a gorgeous wide stream over which 22 bridges were built – right in the heart of the city.  It is always a popular site for a grabbing a sandwich or gathering with friends, but especially so in the hot summers where people wade in to cool down. 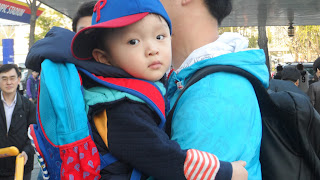 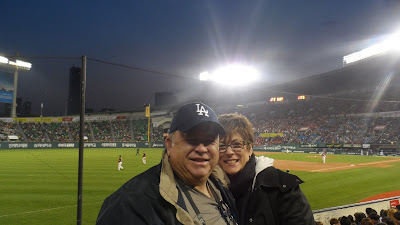 The evening’s activity could only be considered a major trip highlight, for it was off to Jamsil Stadium at the Seoul Sports Complex for a baseball game between the LG Tigers and the Lotte Giants.

Having gone to a game in Tokyo, we were somewhat prepared for the levels of enthusiasm Asians have for the sport.  They cheer as though every play would determine the outcome of the World Series.    Field level seats were about $12 USD, so it is very affordable and the beer flows heavily.  In fact, not only is there no bag check which is S.O.P. at every U.S. stadium, people walk in with cans – even 6-packs!  Can you imagine that at home??  And there is a head “cheerleader” on each side of the stadium – one for each team – but they are only in action when their side is at bat.

Around the sixth inning, the most curious thing happened.   Stacks of plastic shopping bags were handed out – I thought it was for collecting our trash – but wasn’t sure.   The custom is to blow up the bags and tie them to your head.  You wouldn’t believe it were it not for the photo.

Two thoughts:  boy, would the plastic bag police go nuts in West Hollywood, Santa Monica, etc., and WHY???   I did find out the next day from our driver (a huge baseball fan) that the bags are indeed for collecting the trash and as a show of loyalty to the orange and black Lotte Giants (who lost in an exciting come-from-behind victory by the Tigers). 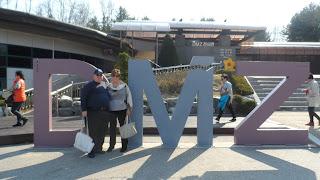 Our second touring day was a trip to the DMZ, only 90 minutes from the center of Seoul.  The area has become a very popular destination as Korea is the only remaining divided country in the world.  Of course the hubby never missed an opportunity to make poke fun at the tyrant from the north with various derivatives (none complimentary) of his name.  It is quite fascinating from the Observation Deck there to get a clear look into North Korea in the distance (everyone is restricted some 15 feet back from the wall for photography); you can get a good look in the telescopes (for about $.50), but we travel with binoculars.  After the Korean War ended, four tunnels were subsequently discovered, built by the North and intended for an attack on the South; they have since been secured with lighting, etc.

Visitors may walk the same historical paths – for 400+ meters (a little more than a ¼ of a mile), the tunnel is 6.5’ x 6.5’ and easy to navigate but very steep.  From that point, bending over and a hardhat are required so that was enough for us.  Thank goodness for the walking shoes worn (remarkably a woman showed up in stilettos), providing great traction.  SLOWLY we made our way back up … and, to our delight, some USAF were outside so a photo was in order (there are about 38,000 troops and these guys love it here).

I‘ll continue with our Seoul visit in the next blog, plus this vacation’s last destination of Shanghai …

Teri B.
ADVENTURES IN BEIJING (PART 2)
THE REST OF SEOUL AND ON TO SHANGHAI