ADVENTURES IN BEIJING (PART 1).  From Hong Kong, our China Southern flight of 3+ hours was made somewhat tolerable (I’m OCD about the A/C and the flight had none that was discernable) by the Taiwan national sitting between us who spoke great English.  A resident of North Carolina who happened to be in China on business, he explained some things that seemed odd to us regarding the culture in China.   A very kind man, we said goodbye as we collected our bags and found our guide for the entire stay, a young woman named Evelyn accompanied by our driver Shi (“Sure”) in a very nice Chinese-made sedan called Red Flag.

Off to our hotel in the downtown area and the first exposure to the legendary traffic here.  Second culture “shock”:  no Facebook, Twitter, You Tube, etc., and anything via Google (like Gmail) is at best spotty.   Government intervention on steroids!
Dinner the first night was in the hotel, a very good Italian restaurant … of course after engaging a couple of the chefs (one from Florence and one from Rome), here come the food offerings:  a small pasta primavera and then remarkably a couple of Grand Marnier soufflés for dessert!  Appears these folks love to show their appreciation and skills and we were the happy recipients .. 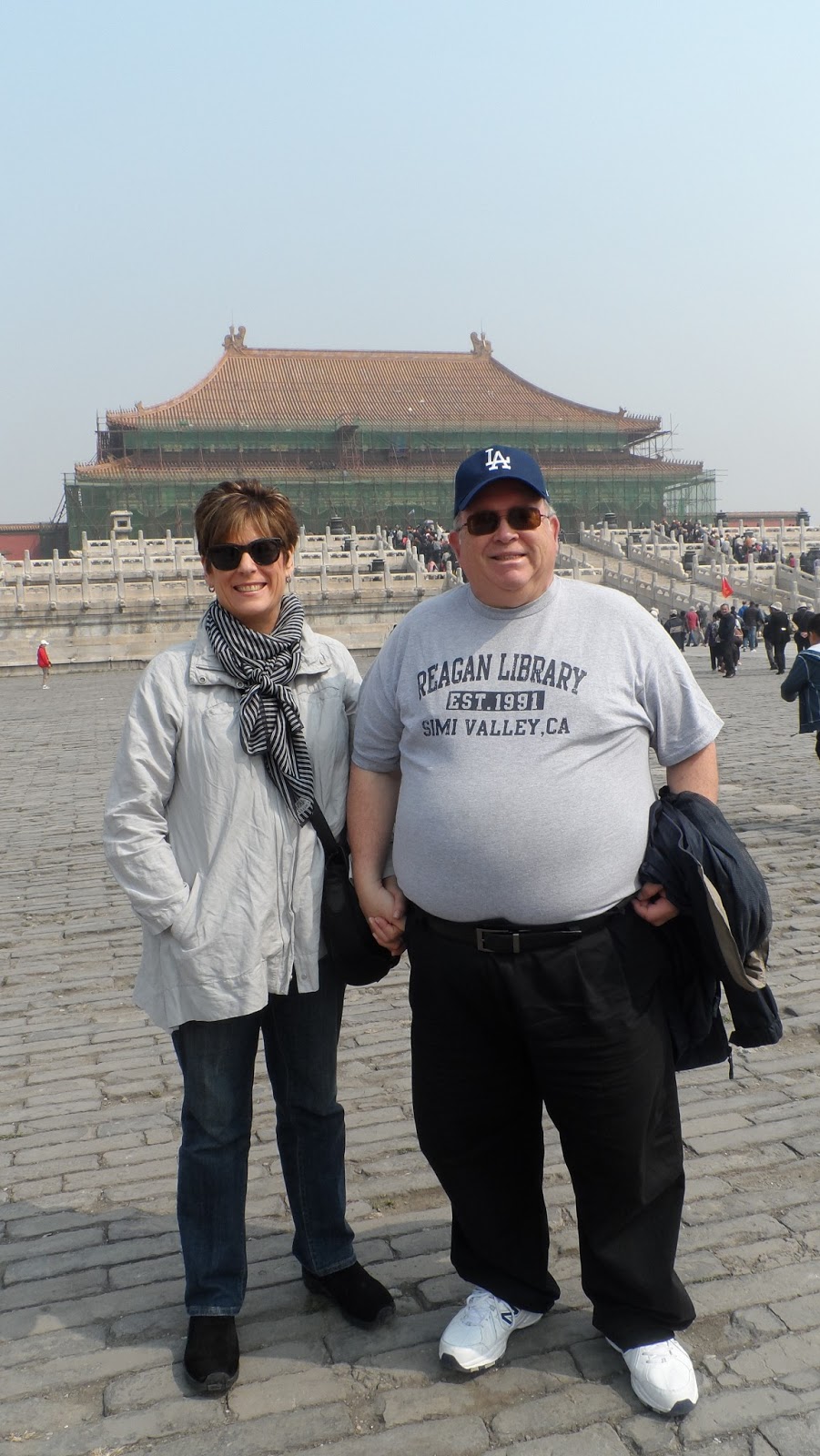 Our first full day of touring started at the Forbidden City, built over a period of 15 years or so in the 1400’s.  I digress to say I had made all the touring arrangements prior to leaving Los Angeles via the China Travel Service based in So. California … of course we have the option to change plans once here, but the basic outline was planned.   This proved to be excellent, including having the company secure our Visas, etc.  Back to the site – it is difficult to convey how vast this place is.  At the height some 90,000 people lived here. 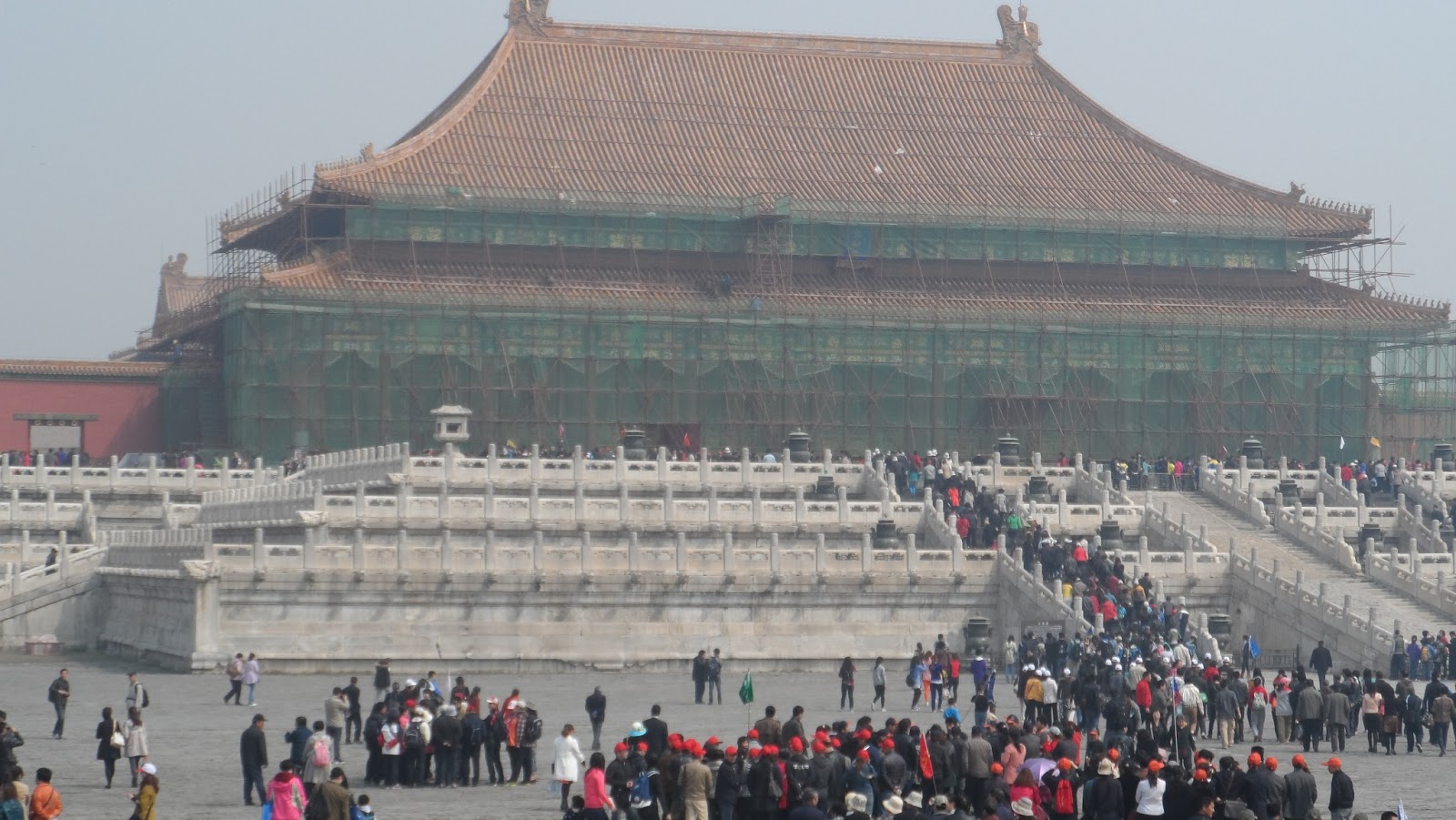 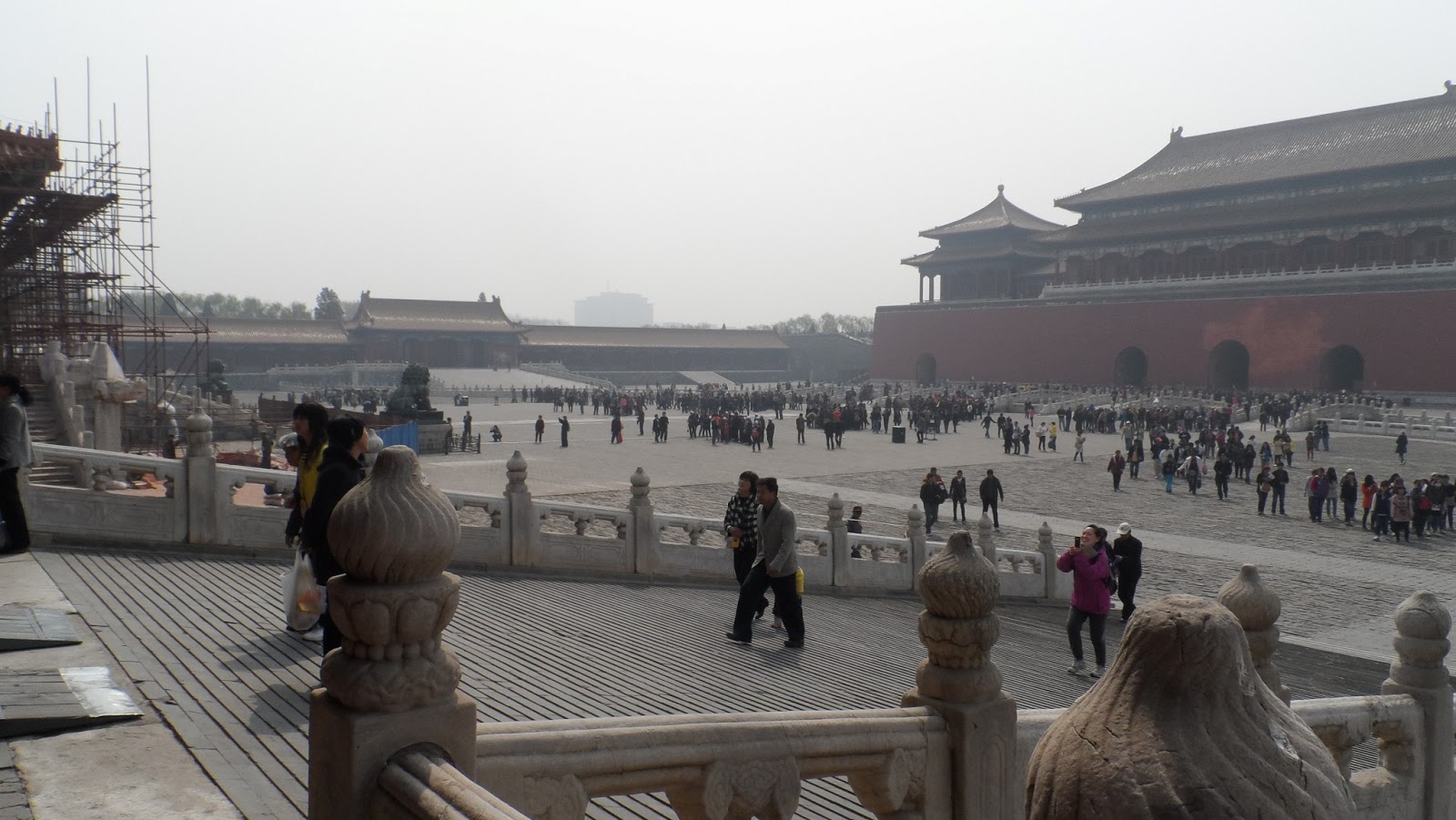 Each Emperor had just one wife but apparently endless numbers of concubines, and then there is the whole concept of men becoming eunichs just to gain entrée to the Forbidden City; that was the only way to insure they would not be tempted by all the women there and the bloodline would remain intact.    Seems a rather steep price to pay all things considered …

We toured a typical Beijing neighborhood (hutong) via pedicab or “rickshaw,” 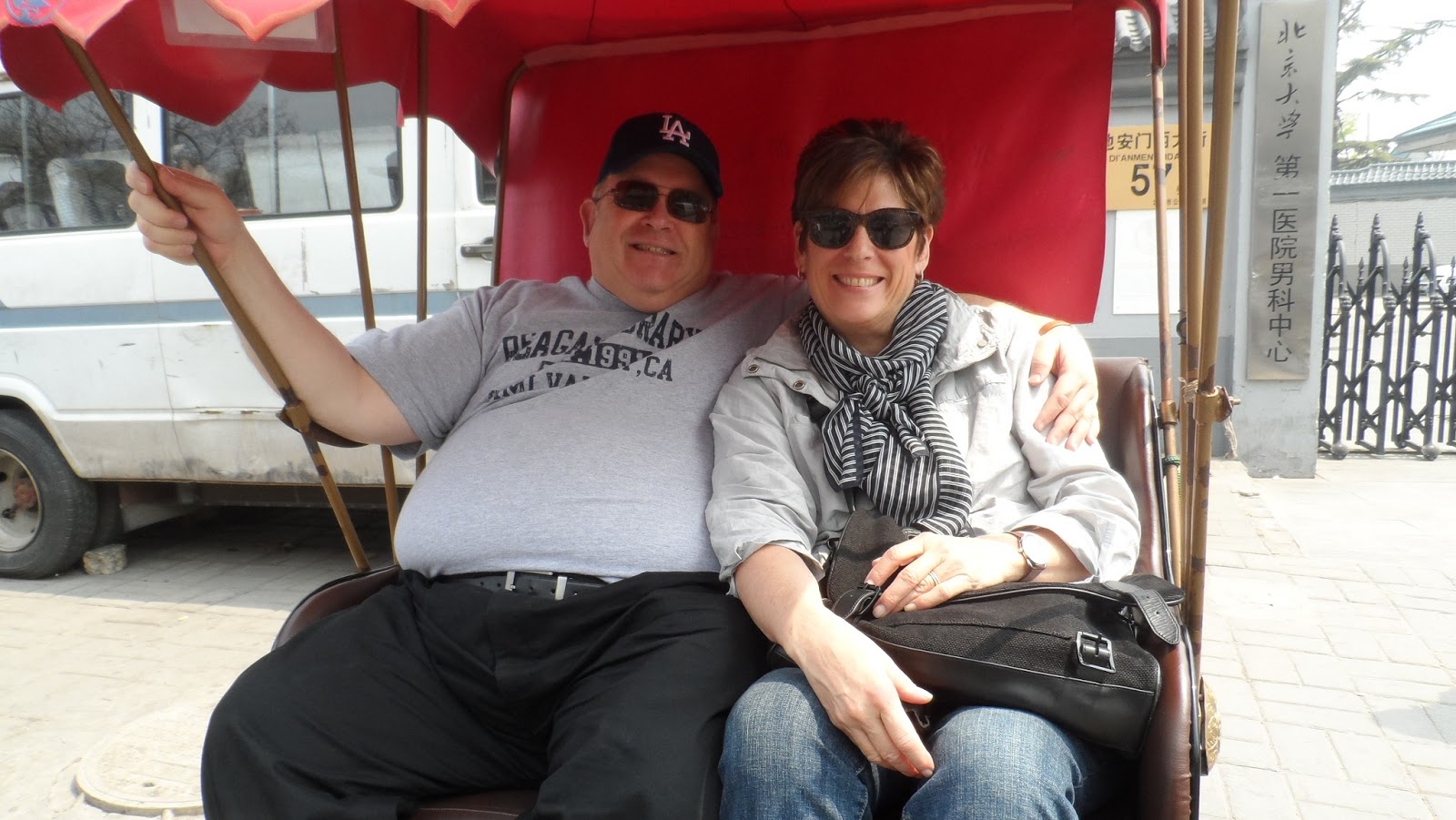 also pre-arranged with a different guide and driver for that area.  Included was touring a private home – really a series of rooms surrounding a courtyard – this particular home had been occupied by the same family for five generations.    Obviously this is a way for residents to obtain some income by opening up their homes to a few tourists at a time or even providing a meal … we purchased some of their handicrafts as a show of appreciation.   After a typical Sechuan-style (delicious) lunch, we had a private tutorial on the art of brewing tea and all of the benefits of the various types of Chinese tea.  Suffice to say, they saw me coming and I bought plenty to take home.

And what would a trip to Beijing be without experiencing the famous duck?  Ask the hubby as it is not my cup of tea but this experience was something, complete with tableside carving at well-known restaurant Duck de Chine. 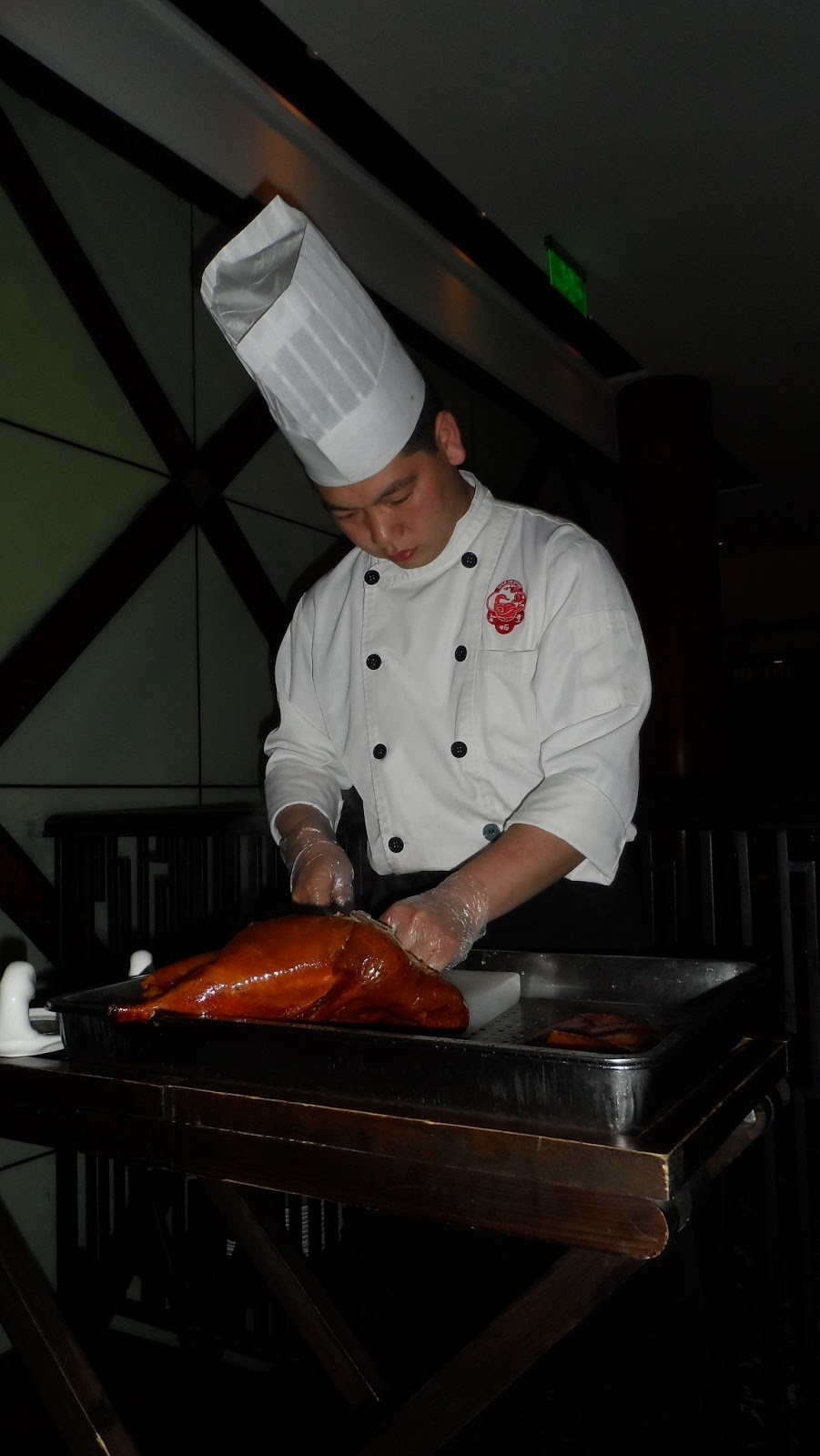 Of course being charged for the hoisin sauce separately is not ok; sort of like ordering fries and the bill arrives with a separate line item for the ketchup!  That was an interesting “discussion” … after dinner, should we have been alarmed when the cab driver pulled out a magnifying glass to look at the hotel address we handed him?   Uh, if he can’t read how does he see the road???  Remarkably we made it back safely and paid a third of what he thought a couple of naïve tourists might fork over for the ride.  Found out the next day a move like that could land him in jail; that kind of behavior is not tolerated here.  But, in short, the taxi situation here is just awful.  Even with printed maps/directions in Chinese many had no idea where to go.  And the wait can be endless just to get a cab.  China may be very advanced in some areas, definitely not in this one.

Big day today:  a stop at the Olympic Village (constructed for the 2008 games) 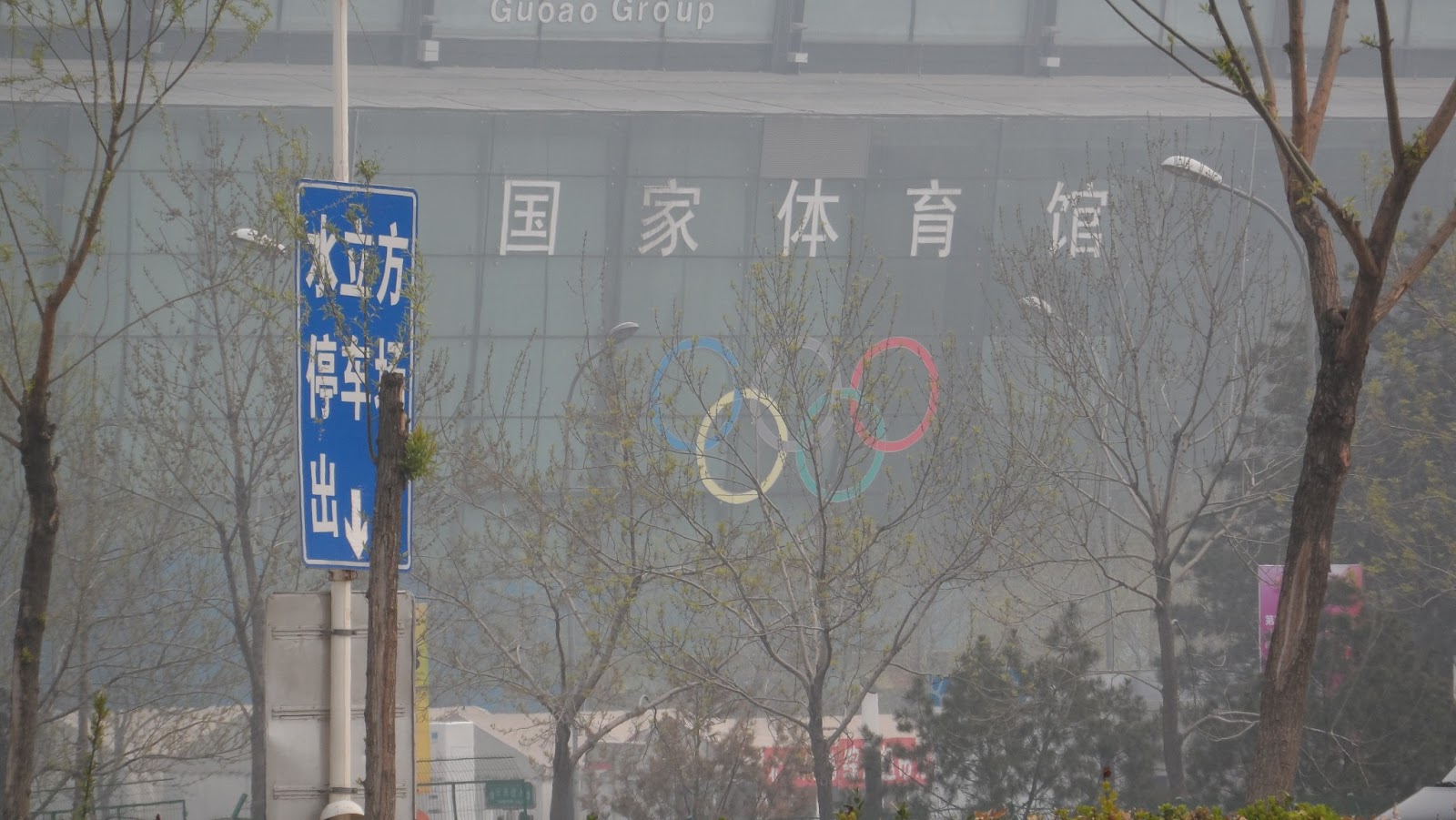 and then on to the Great Wall and finally the Emperor’s Tomb from the Ming Dynasty – well, technically a place of worship as the actual tomb has never been found.

As for the Wall, this particular section (Badaling) is accessed via cable car.  I just ignored the steep upward climb and focused on the goal at hand which is experiencing this historic site – one that is visible from space. 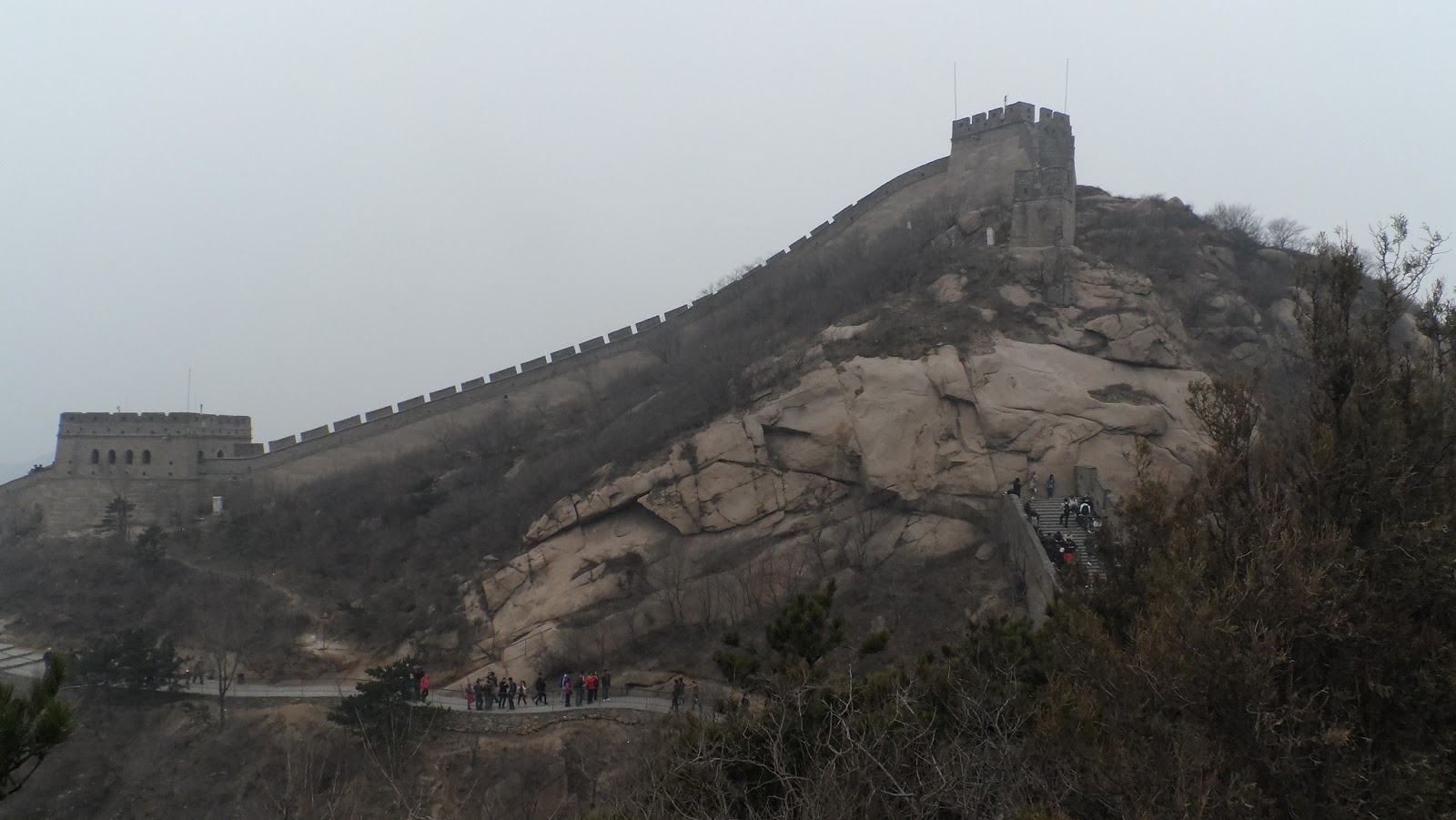 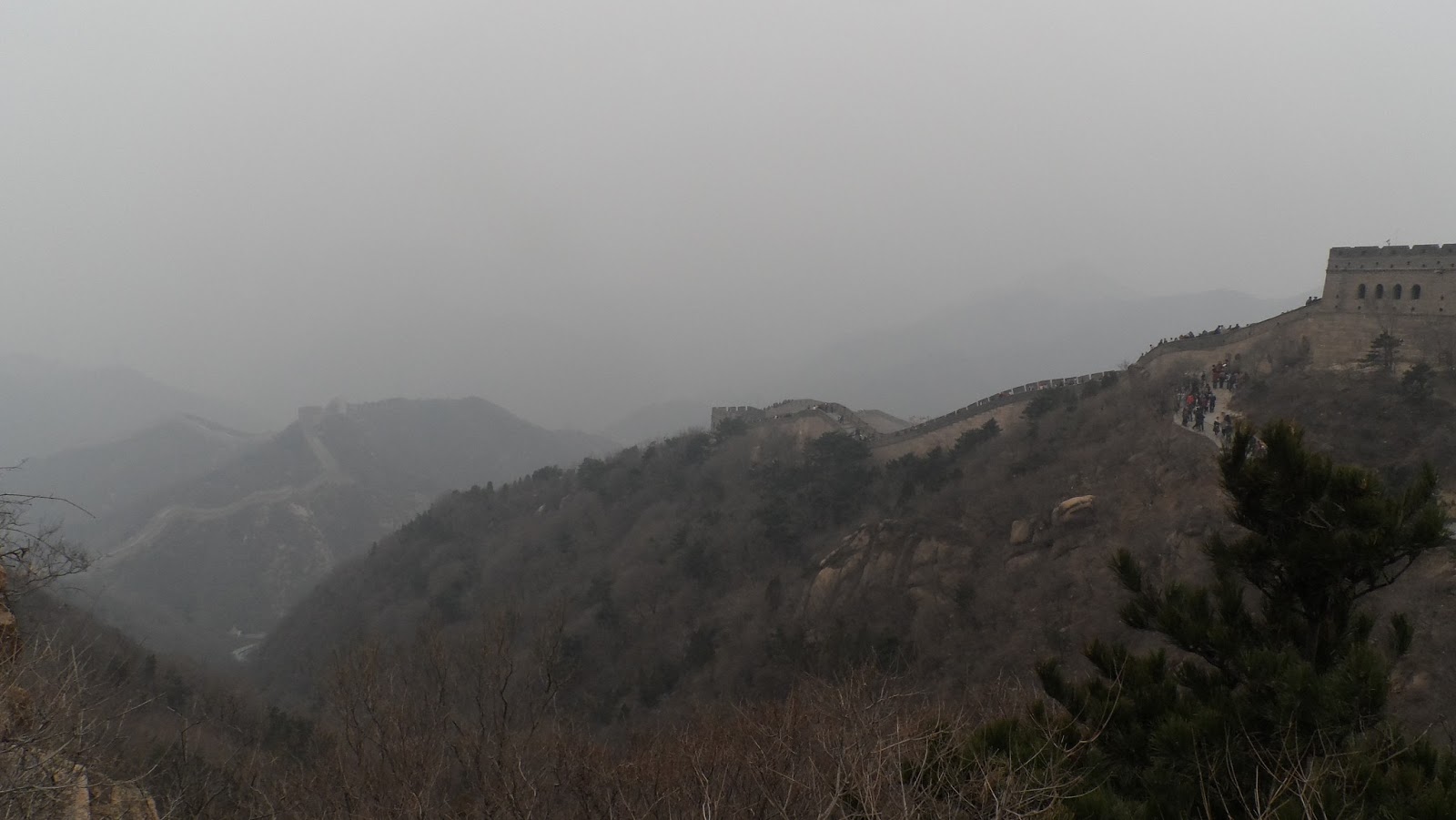 It is also known as the Great Cemetery as there are possibly 1 million workers buried in the wall — they died either from fatigue or injury and simply became part of the structure. 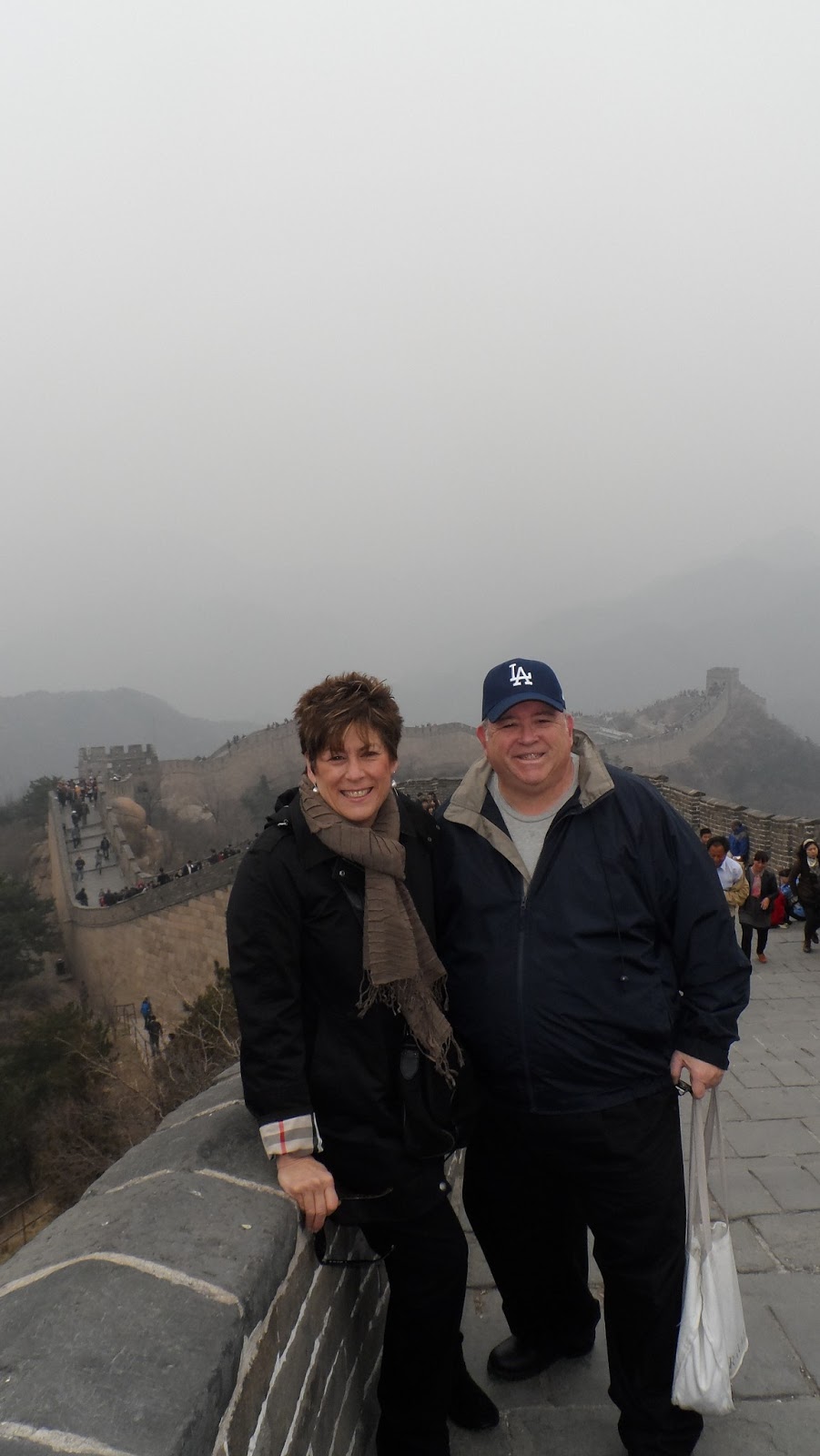 Steep and a bit daunting but not too crowded for a Monday morning, we came, took photos, and carefully made our way out.  If ever I wanted to fully test drive my now year-old (artificial) knees, this was a boffo place to do so (they passed, but ice and Advil were definitely in order).

Beijing has many great restaurants, and tonight’s meal at Maison Boulud (as in NY’s Daniel Boulud) was no exception.  Housed in a former embassy, the ambience was gorgeous.

Our entree of veal shank for two was truly enormous, so we packed up the leftovers for our very grateful guide for her family’s feast the next day!

Stay tuned for Adventures Part 2; in the meantime, please enjoy these random Beijing thoughts and observations:

There is virtually no crime here except for pickpockets (so we were told); the police have neither guns nor knives as they are banned from all.
Smoking is alive and well (unfortunately) but dental hygiene clearly is not a priority.
All those jokes made about Asians and driving?  I would NEVER consider driving in this country!   Wow, I lost count on the number of what I considered near misses …
Factories of every type – jade, tea, cloisonné – were somehow connected to our daily stop for lunch.  In fact you had to walk through them to get to the restaurants.   Not much difference from other countries visited: in Turkey it was rugs and in Egypt it was alabaster – deals, deals, deals and calculators everywhere.
You can get perfect cell service on top of the Great Wall, but not driving on Coldwater Canyon in Los Angeles.  Oh, and some say New Yorkers are pushy?  Can’t hold a candle to some of the elderly women we’ve encountered.
I couldn’t resist taking photos of the many examples of “Chinglish,” as our guide called the translation of some phrases on signage here.   And there are the most gorgeous children; with parents’ permission, took a few snaps of them as well. 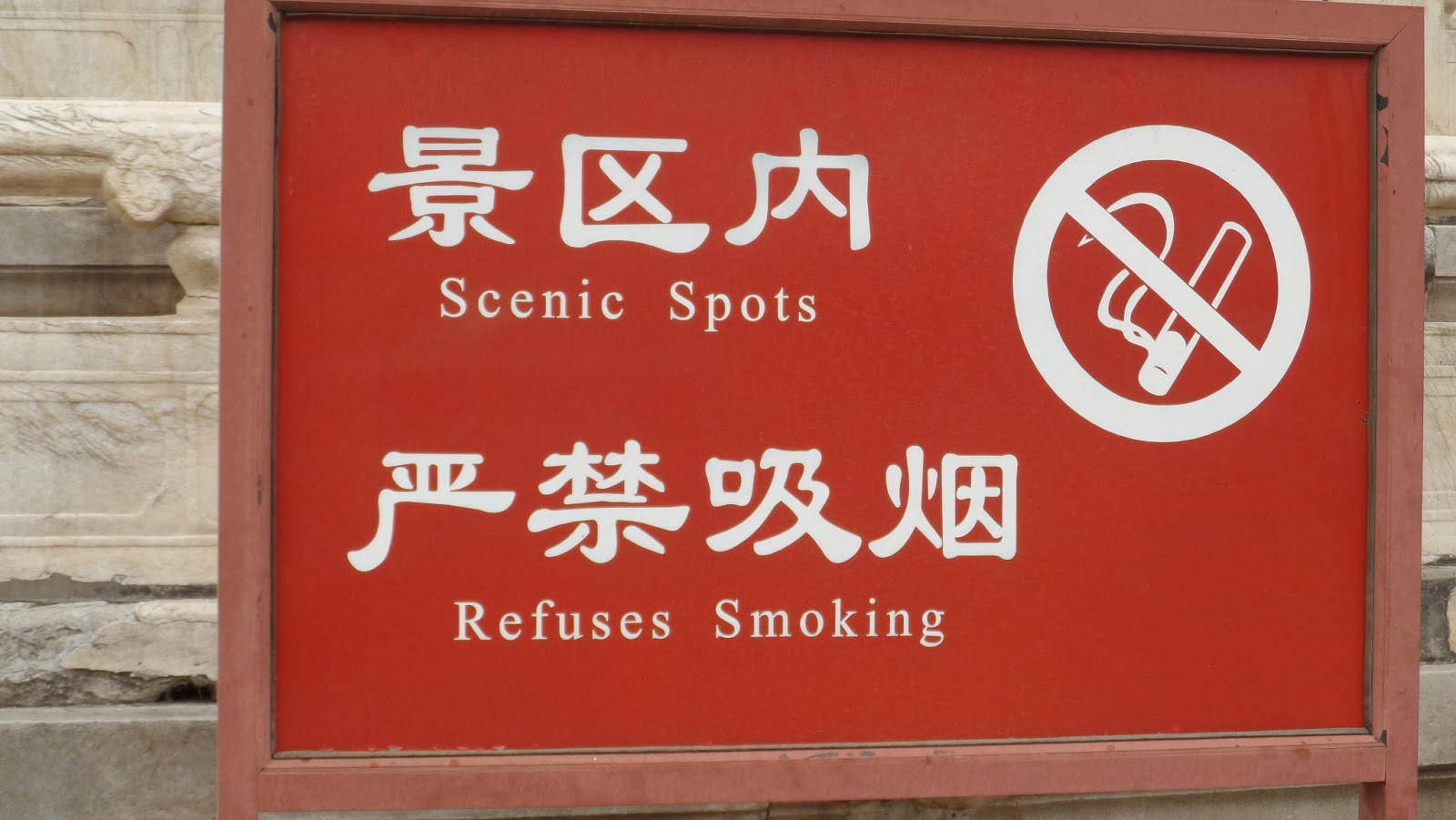 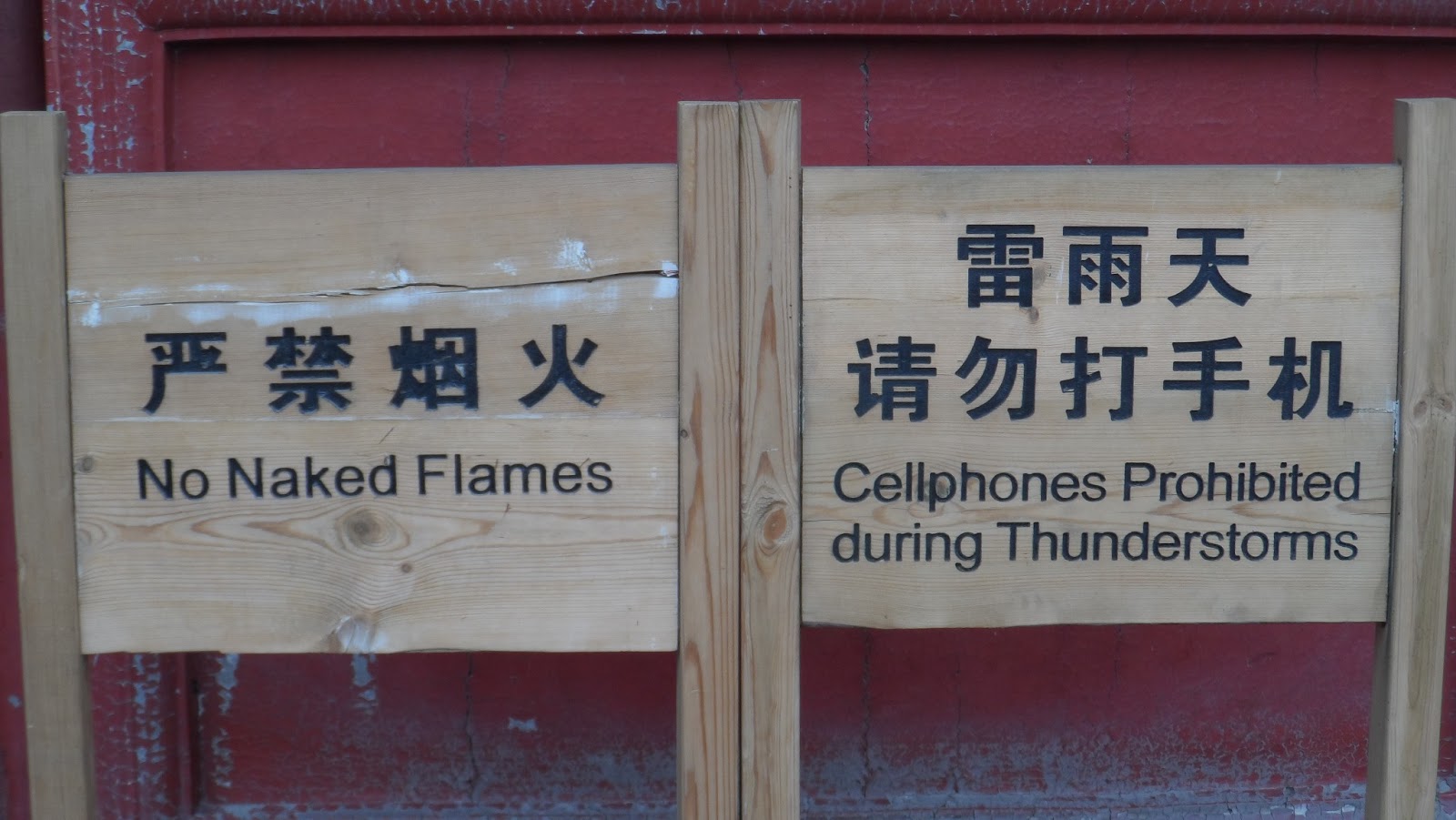 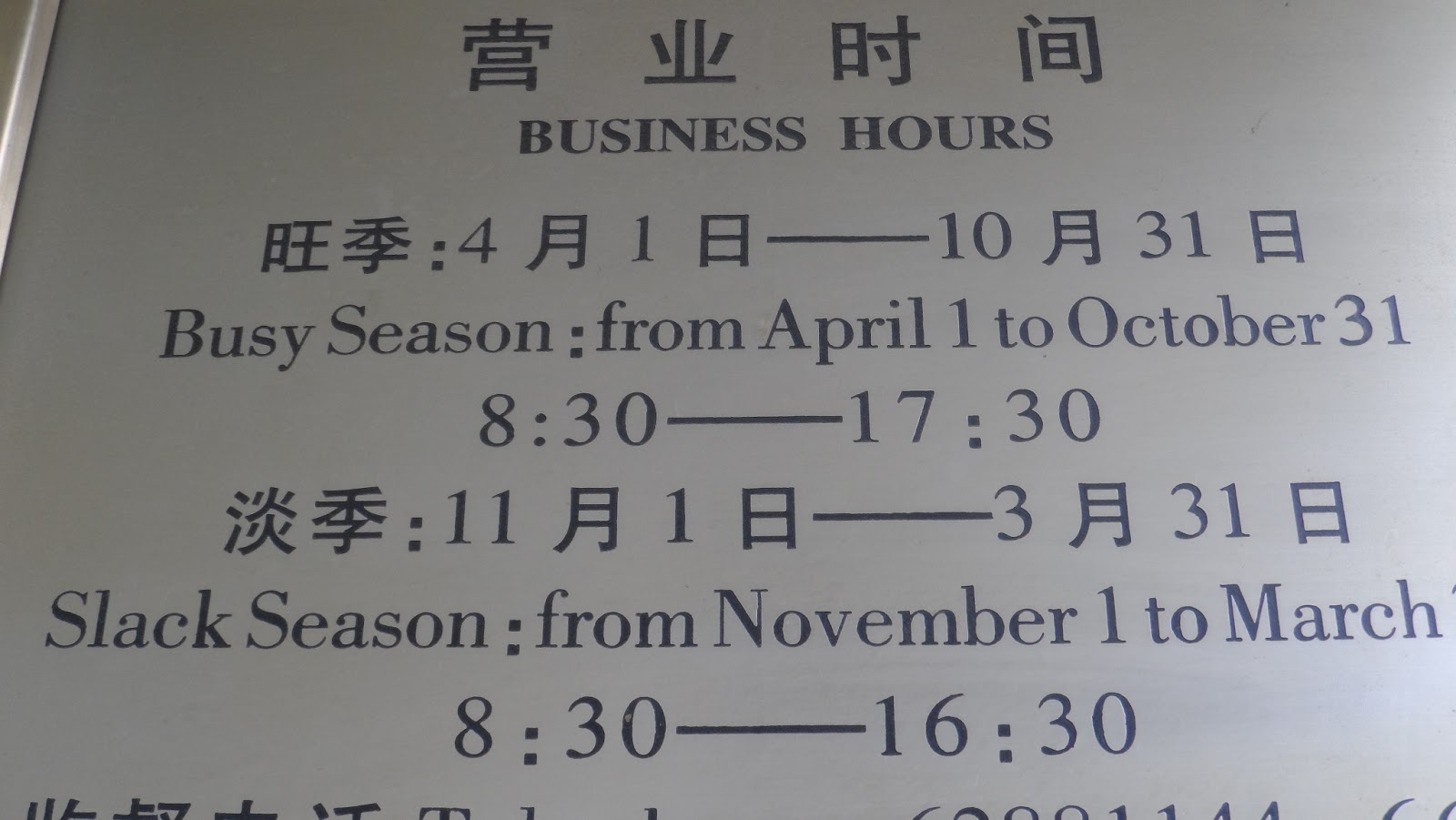 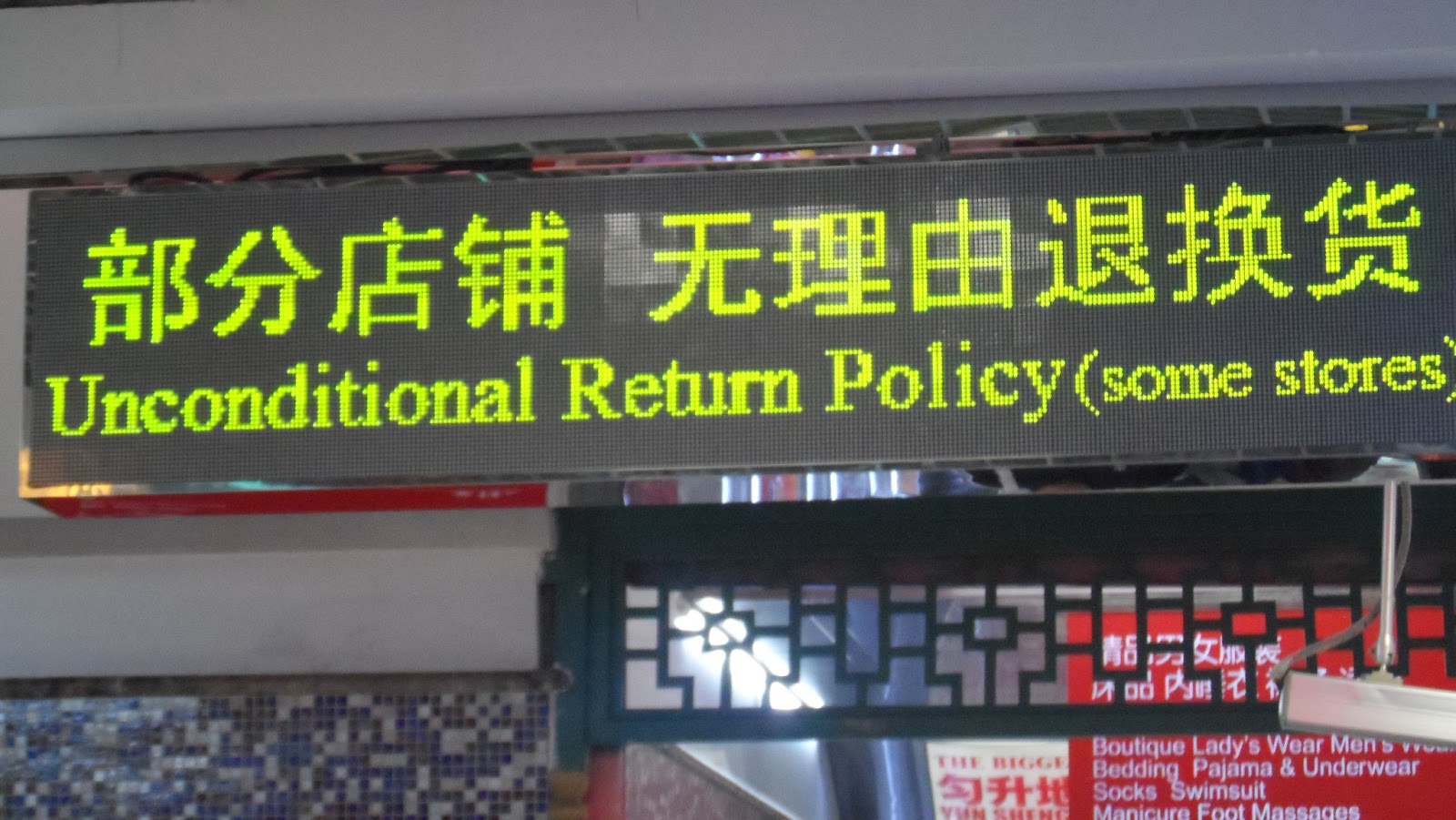 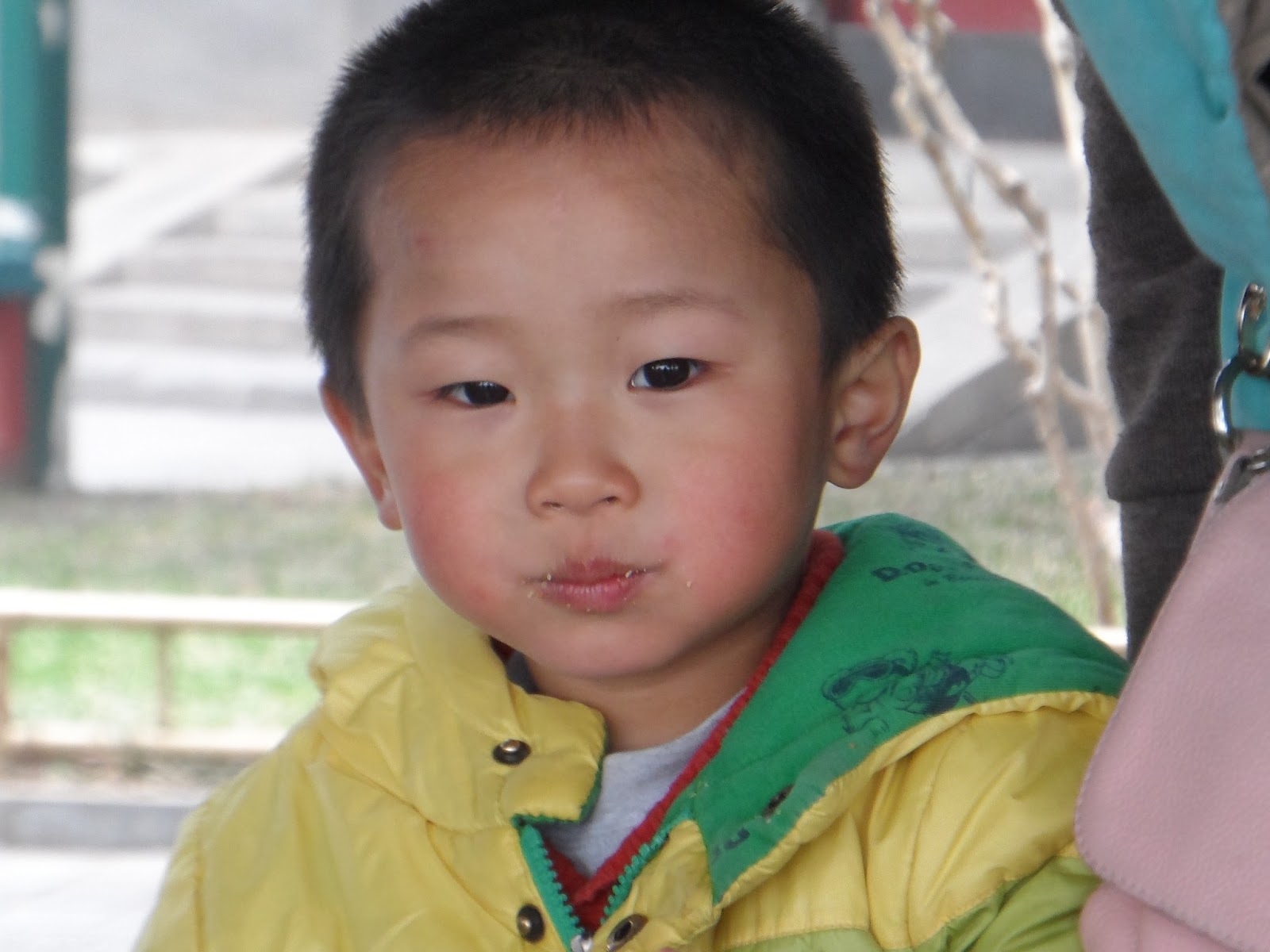 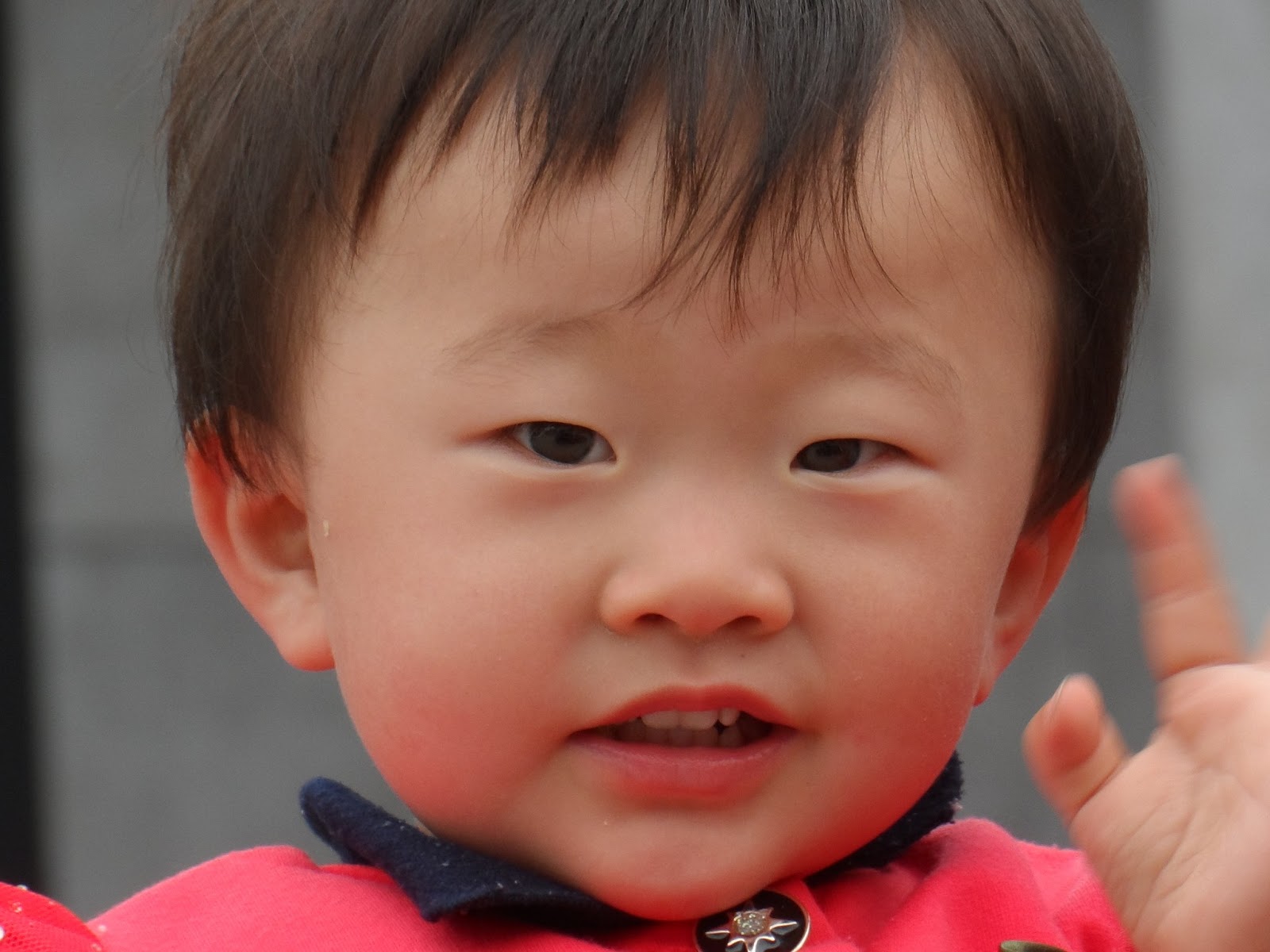